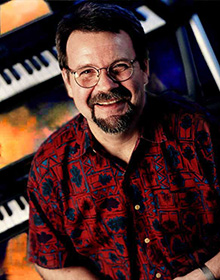 Years ago, John Wasson ('80, '83 M.M.) wrote a big band arrangement of Juan Tizol's "Caravan" for a band in Missouri. Then, in 2013, a music supervisor called him up to use it for an independent film, Whiplash. The movie used the work for its climactic scene and won three Oscars at the 2015 Academy Awards.

"They heard the album from the Missouri band and decided that my version of 'Caravan' was the one they wanted," says Wasson. "I never thought it would end up in a movie."

The movie, about an abusive jazz professor played by J.K. Simmons who skimps on praise and doles out reprimands and physical punishments, uses Wasson's work to showcase the main character's jazz drumming. But Wasson's own experience studying jazz at UNT was far from that traumatic.

"It was a great experience," he says. "I was part of the One O'Clock Lab Band and we went to Europe twice."

Wasson works at his studio in McKinney where he writes music and also works as a church music director.

"This was kind of a good luck thing," Wasson says. "It was complete happenstance. But I'm grateful for it."