As a communication design student in the College of Visual Arts and Design, Lori Massey ('92) had to come up with 200 ideas for each project in a graphic design class.

"At the time, I thought, 'This is crazy,'" she says. "But it really taught me to get all bad ideas out first. I still try to do that today."

Massey puts that exercise to use as a creative director for Fossil -- one of the top international clothing and accessories brands-- where she designs for print and packaging, art directs photo shoots and supervises the creative team. She's one of several alumnae who have taken the design skills they learned at UNT to create logos, websites and advertising for national companies such as Ann Taylor, Fossil, Victoria's Secret and The Gap's Piperlime line.

"It's really incredible to watch these graduates blossom and grow and attain that level of leadership," says Eric Ligon ('97 M.F.A.), interim dean of CVAD and former program coordinator for the communication design program.

He noted that recent graduates are more willing than graduates used to be to go beyond Austin and Dallas and pursue jobs in New York City, San Francisco and other creative hubs across the nation. He says UNT's program -- which is set up so students learn to create a message and identify and solve problems -- has led students to these high profile jobs.

"Now they believe the world is possible," he says. "They find great success wherever they go. It's been very exciting to see them succeed beyond their imagination."

Massey always had been creative -- a talent encouraged when her fourth grade teacher praised a book she wrote about a bluebird, "Bluberri," that went on a great adventure.

When she visited UNT's Art Building in high school with a friend and her friend's father, then a graduate student, she says, "I knew this is where I belonged."

Lori found her UNT family in both the art building and through Kappa Kappa Gamma, where her sisters encouraged and championed her design skills early on. Once they knew her talent, she designed Greek life t-shirts for many events during her time on campus.

While at UNT, she had to brainstorm those 200 ideas for the now retired Jack Sprague's class .

"He was the absolute leading force for  why I stayed with it," she says. "He expected a lot. That's stuck with me."

She also created company logos for the Fine Line Graphics program, a student-run professional design firm where students were hand-selected and supervised by David Blow, Professor Emeritus of communication design. The experience taught  her an understanding of how corporations operate -- such as the process of meeting a client, brainstorming with a design team, meeting deadlines to show ideas and ultimately presenting those ideas to the client. After graduation, Massey worked for a year at Dallas-based Interstate Batteries, where she designed pieces, such as car battery labels, NASCAR autograph cards, T-shirt graphics, convention graphics, banners and counter-top cards, and even NASCAR pit crew uniforms.

Then she came to Fossil. She first worked on everything -- graphics, watch designs and even a limited edition The Wizard of Oz watch that was housed in a red ruby slipper shoe package.

"I recall that time of my career with such fondness, because I was working on licensed watch and packaging projects for Peanuts/Snoopy, Barbie and The Wizard of Oz, all around the same time," she says. "It was three of my favorite childhood memories, all wrapped up in a real-life dream job."

Massey has moved up the ranks and supervises three design teams that handle different areas of business under the Fossil Group umbrella: Relic Brand, corporate markets and private labels/speciality markets for Target and Wal-Mart.

"I love following our brands on Instagram, and enjoy seeing people post about how happy our products make them," Massey says.

When Cecilia Gates ('00) attended UNT, she was struck by the committed attitude of the college's faculty.

"One of the best things I learned from that school is that they took it very seriously," she says. "They were the client and students were the agency. When you went out to the real world, there were no surprises. It's tough, but people don't give you any passes."

This attitude has taken Gates far. For her first job out of college, she designed graphics for T-shirts and other sundries at Levi's in San Francisco. She then worked at an agency where she had the opportunity to completely transform a Niketown store in Los Angeles into an NBA- themed-experience for customers.

"You learn all these skills in school – then you take those skills and manifest them into products and merchandise for the clients," she says. "It keeps evolving and evolving."

Gates then organized photo shoots, direct mail and packaging and oversaw stores for Gap. After stints at Sephora and Loft, she launched her own agency in New York City last year so that she can work on a variety of tasks for clients.

She especially enjoys fashion photography, where she can see all of her design skills -- from stylists to hair and make-up -- on the pages of fashion magazines.

"You have this end piece that you envisioned," Gates says, "And then it comes to life." 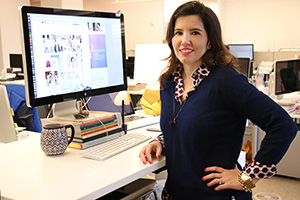 In her junior year at UNT, Amy Hayson ('97) began researching jobs by poring through the countless magazines in Spague's research library.

She knew she wanted to work in San Francisco by the materials produced by the city's design agencies. And thanks to the portfolio she learned to create at UNT, she landed her first job with her dream agency, Sterling Design.

Hayson worked for Levi's, where she did everything from designing T-shirts and sundries. She then co-owned her own letterpress stationery company, Peculiar Pair Press, which was sold in more than 400 stores and featured in Martha Stewart Living multiple times before closing.

After working for Pottery Barn for two years, she moved on to Piperlime, where as associate creative director she oversees its digital operations, such as email, social media, banner ads and the recent redesign of its websites and branding.

The revamp changed Piperlime's brand from whimsical to more sophisticated.

"It was the biggest, most rewarding job," Hayson says. "How often do you get to rebrand a major company?"

While in New York City for a photo shoot, she saw a woman holding a bag with the new branding.

"I was really proud," she says.