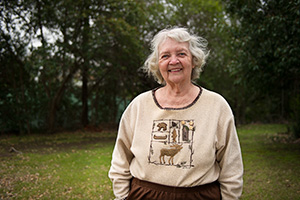 A love for the environment and childhood education has shaped Christine Kallstrom's ('72 Ph.D.) teaching career. Kallstrom, who earned a doctorate in early childhood education, is director emeritus of Treetops-in-the-Forest, a nonprofit organization that provides environmental education for children of all ages and encourages them to explore the connections of nature to the arts, sciences, social studies and math.

The school, founded in 1989 as an extension of the Treetops School -- a charter school in Euless that Kallstrom helped found -- sits on 20 pine-covered acres in the Davy Crockett National Forest. Kallstrom calls it "a live-in museum for the harmonious convergence of human and nature."

Kallstrom, whose late husband, James ('61), and children Kathy ('76) and Dwight also attended UNT, taught elementary education early in her career. She formed home school groups when home-schooling her children and, as the groups grew, helped start a school that could provide the best education possible for all children. The Treetops School began in the 1970s as an alternative school, where she realized that both gifted students and students with learning disabilities benefit from individualized education.

"It's not about just teaching students to use their strengths and weaknesses," she says. "It's about teaching individuals and finding a way to stir their interests and realize their potential."

The school later was a co-op before it became a charter school and bought the land to start the forest camp. Kallstrom's hope is that the students there are able to climb to heights that are not just their own.

"I want students to explore the world that is around them and that is within them -- to get an education not just found in textbooks," she says.

As a Ph.D. student, Kallstrom remembers going to the office of Velma Schmidt, her early childhood professor, with 4-year-old Dwight. Schmidt gave him three shiny rocks to play with while they discussed class.

"Dr. Schmidt taught me that we talk to our children too much," she says. "A gesture is more powerful than words."