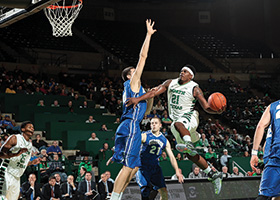 Mean Green men's basketball was hot on the court this season, putting together a five-game win streak in February before dropping the final home game against Old Dominion Feb. 28.

The streak was the program's longest since March 2011, and the team's success was due in part to the stellar play of the four seniors, Colin Voss, T.J. Taylor, Armani Flannigan and Jordan Williams.

The Mean Green entered the Conference USA Tournament March 11-14 in Birmingham, Ala., as the No. 8 seed with high hopes for more stellar performances. 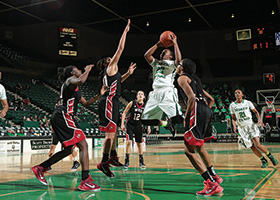 The team needed a win against UTSA in the last game of the season to clinch the 12th and final seed in the conference tournament, but lost a close one, 57-54. They ended the season with the program's second-best scoring defense of all time. 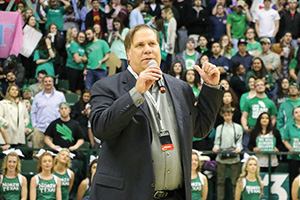 George Dunham ('88), the voice of Mean Green athletics for 25 years and a part of the Mean Green Radio Network for nearly 30 years, called his final game as the Mean Green's play-by-play man Feb. 26 during the men's basketball win against Charlotte. Dunham retired from his play-by-play duties but will continue as co-host of the morning-drive show on KTCK Sportsradio The Ticket. In his honor, KTCK broadcast its afternoon show, The Hardline, from the Super Pit and then broadcast the game along with KHYI.

Dunham's honors continue this spring as he joins the latest class to be inducted into UNT's Athletic Hall of Fame. The ceremony and banquet take place at 11:30 a.m. April 18 at Apogee Stadium in conjunction with the Green and White spring football game. Dunham enters the Hall of Fame as the winner of the Fred McCain Award, presented for contributions that have a major impact on the athletic program. Also accepting Hall of Fame honors are Willie Parker, football; Judy Buckles Nelson ('80 M.S.), women's basketball coach; Leonard Dunlap, football; and Walter "Weasel" Johnson ('79), basketball.