Get to Know
Ashleigh Smith 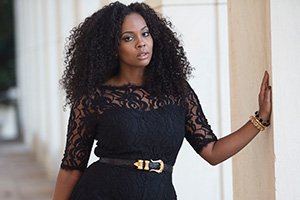 The second time was the charm for Ashleigh Smith ('11), who won the prestigious Sarah Vaughan International Jazz Vocal Competition in 2014 after being named first runner-up in 2012. The unique contest is designed to propel the career of an up-and-coming female vocalist to new heights.

Presented in November at the New Jersey Performing Arts Center, the award known as the Sassy comes with a $5,000 cash prize and an exclusive recording contract with Concord Records. Smith also gets the opportunity to perform in the highly acclaimed Jazz Roots Concert Series.

As a background vocalist for Grammy-winning R&B artist Chrisette Michelle since 2012, Smith knows how to work the stage whether she's with an ensemble or singing solo.

A graduate of the UNT vocal jazz program under the instruction of music professors Rosana Eckert, Jennifer Barnes and Timothy Brent, Smith has sung with the world-renowned group The Manhattan Transfer and jazz singer and lyricist Jon Hendricks, performing across the U.S. and Northern Ireland. And she just wrapped up her reign as the 2014 Miss Black Texas USA, through which she promoted her platform to preserve music education in public schools.

"A lot of kids are in public school programs where the arts are being ripped out," says Smith, who hopes to open a music academy in an at-risk neighborhood one day.

Born in LaGrange, Ga., to a family of music educators and informal musicians, she says music is in her DNA.

She was two years into a full scholarship in classical music at a Georgia university when a professor challenged her to pursue her true passion -- jazz. He recommended UNT's Vocal Jazz Workshop.

"I had never been around live jazz, and the workshop was my first thrust into jazz education," Smith says. "I had figured out things like scatting on my own, but I really didn't know what I was doing. I realized I was far behind, but I was so inspired."

"Her voice had an interesting sound, reflective of history but with a nod to the future," says Eckert, remembering it was clear that Smith had listened to a lot of jazz.

Smith transferred to UNT and transformed her music focus in the rigorous jazz studies program. She won three DownBeat awards, one as a soloist and two as a member of the UNT Jazz Singers.

"UNT is the No. 1 school for jazz," she says. "I knew I needed to be there if I really wanted to perform professionally."

In her second trip to the Sarah Vaughan competition, the confidence Smith had gained from professional experience combined with her UNT-honed soulful sound to make a subtle difference.

"I was better this time at embracing who I was, and I treated it like another gig, and it was just fun," she says. "Winning wasn't my goal. I went in to get better."

Smith felt confident until her performance of "Tight" from Betty Carter's 1976 jazz album, when the accompanying instrumentalists faltered. With her audience, Smith laughed off two restarts, early key changes and a skipped final chorus. She was sure she'd lost.

"The judges said I handled it like a professional," Smith says, "and I thank my UNT training for that."