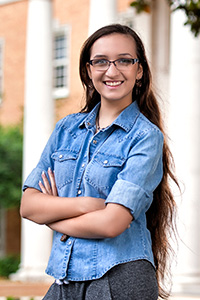 Noel Jett is the perfect person to study for a doctorate in gifted and talented young people.

After all, she's 16 years old. And she will be entering the University of North Texas this fall to pursue her Ph.D. in educational psychology. She earned her bachelor's degree in psychology from Texas A&M University in May. Her own experience as a gifted child has been challenging at times, and she hopes to research ways to make it easier for others.

"As a gifted person, I want to know how people like me work," she says.

Jett, who grew up in Fort Worth, has been on a different pace from her peers since kindergarten.

"Being a gifted kid created a sort of language barrier when I was younger," she says. "In kindergarten, other students were learning their letters. I was reading chapter books."

Her mother, Nancy Shastid, home-schooled Jett for much of her youth. At age 12, she attended the Texas Academy of Biomedical Sciences in the Fort Worth ISD, a program that prepares students for a career in biomedical sciences with high school and college courses, for a semester. Then she spent a year and a half at Tarrant County College before attending Texas A&M.

Most of the other college students didn't know her age. At 5'6", Jett was taller than many female students.

"I never stood out that much," she says. "I was relieved that I blended in. I was there for an education, not to be an anomaly."

Though she didn't go to prom, she did attend the "ring dance" for the graduating class at A&M. But she couldn't drive or participate in a Study Abroad program. She lived with her mother in off-campus housing.

"I feel like I definitely skipped the high school experience, and I have no regrets," she says.

When she's not concentrating on school, she enjoys watching movies, writing poetry, playing piano and painting. She won $25,000 during the "Whiz Kids Week" on Who Wants to Be a Millionaire? last year.

Jett is looking forward to living in off-campus housing in Denton with her mother, at least until she's a bit older.

"I'm a big music nerd," she says. "I'm excited to take part in the Denton-y culture."

Jett will fit right in at UNT. In fact, when Jett first contacted Anne Rinn-McCann, associate professor of educational psychology at UNT, Rinn-McCann originally thought Jett was a traditional college-aged student until they met because she had no reason to think otherwise. Jett told Rinn-McCann she was a current student at A&M and she assumed she was in her early 20s.

But when some people find out about her high intelligence, they have different reactions.

"It's honestly a coin toss," Jett says. "Some people say, 'That's so cool.' Other people are so defensive – 'Well, my kid makes straight As.'"

Others have perceptions of what a gifted person should study. One person told her, "You need to find the cure for cancer."

"That sort of weird pressure is a reality for a lot of gifted people," Jett says.

In another instance, she bumped into someone her age that she knew from church. After Jett told a joke, the friend told her, "You know, you're so smart, sometimes I forget you're human!"

"She had labeled me 'smart' and it had erased everything else about me," Jett says. "I was a trope and there wasn't room in that pigeonhole to be funny, so my joke threw her off. These experiences all illustrate the same problem with the perception of gifted people, which is the removal of humanity in order to embrace one feature as the only feature. For those who accelerate through grades, it can be a similar pain with age being the defining and distracting trait instead of an actual trait."

Jett is extremely grateful for the Davidson Institute for Talented Development, an organization that supports intelligent young people with numerous programs. Through the group, she can talk to people who are her age and share her abilities in annual "summits" in person and via Skype in between the summits.

"We get to be ourselves," she says.

Full-time students on assistantship in the doctoral program take courses in the first year and rotate teaching, service and research in the second and third years. In their fourth and final year, they work on their dissertation. (They earn their master's degree as part of the program.)

"With gifted individuals, their minds often work faster and develop faster than their bodies," Rinn-McCann says. "They may be physically one age, but cognitively they're much more advanced. It can be difficult if they don't have support or don't understand what's happening."

Even though she hasn't picked just one topic to research, Jett knows she would like to focus on the social and emotional needs of gifted young people.

"I have always wanted to help people," she says. "I want to be with people and tangibly see how I've helped them."