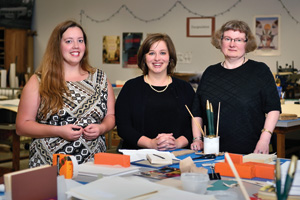 When Texas Normal College and Teacher Training Institute opened on Sept. 16, 1890, President Joshua C. Chilton read a speech to mark the occasion on the northwest corner of the Denton square. The pages of the speech were discovered by UNT archivists in a tiny box of Chilton's documents that had been stored through the years. He numbered the nine pages, adding a 5A and 5B. One page is a little torn up, and page two is missing. But his words are legible.

"Chilton's cursive handwriting is meticulous," says Morgan Gieringer ('01), head of the libraries' special collections. "Seeing his actual handwriting and where he edited and crossed things out -- there's something evocative about it that you don't get with an electronic text."

These historic pages will be the centerpiece of an exhibition presented by the special collections department this year marking UNT's 125th anniversary. The first 50 years will be the focus in the fall, and the last 75 years will be highlighted in the spring. The libraries' staffers also have been marking the anniversary with a blog that contains a weekly post about UNT's history.

But the department's special collections aren't only UNT-focused.

"These collections preserve the first-hand evidence of the people and communities throughout Texas and beyond," Gieringer says. "Our collections include letters, diaries and scrapbooks that, viewed today, provide a window to look back and understand how people lived, and what was important to them, 50 or 100 years ago. Other items such as historic maps and county records provide the larger context for events that shaped communities all over Texas."

Bringing it all together 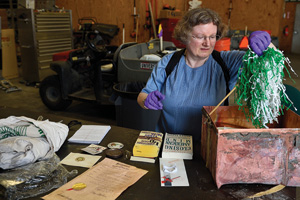 When an item arrives at the libraries, Perri Hamilton ('85) may be one of the first staffers to see it. Her job as an assistant to the archivist, includes examining the materials to check their condition and putting them in order. One of her most recent projects was to look through UNT's time capsules that were buried by students in 1962 and 1988 and unearthed this year for
the anniversary.

The capsules contained letters from students to future classes, recorded speeches, books, newspapers and other materials.

"It was interesting to see what was important to students at the time," Hamilton says.

The items in the 1962 box were in remarkably good condition, but the 1988 box got wet. The VHS tape of a speech by then Chancellor and President Alfred F. Hurley had to be sent out to be dried, and a cheerleader's jumpsuit had to be cleaned.

Many items are sent to the preservation unit. Jessica Phillips, the head of the unit, was assigned the task of conserving Chilton's speech in preparation for the exhibition. She lightly sprayed the pages with a magnesium oxide solution to neutralize the acids in the paper and then encapsulated them between sheets of inert polyester. The process is different from lamination in that the plastic is sealed only at the edges and does not adhere to the enclosed document. 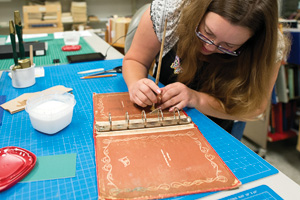 Phillips also works on other projects for the general public. She recently repaired a book, published in the 1920s, for a Houston man. She also conserved a friend's great-grandparents' love letters from the 1910s that had been rolled up in a cigar box and stored in an attic.

Many of the papers were rolled tightly, and some of the rolls had been crushed, so Phillips put them in a "humidity chamber" -- a covered plastic container with water at the bottom and a plastic grid to hold the letters in the center -- so the papers would relax. Then she deacidified and encapsulated them. The friend gave them to her grandmother, the daughter of the letter-writers, as a Christmas present.

"We always handle items with care in preservation, but especially so when these are one-of-a-kind manuscripts such as hundred-year-old love letters or a speech written in President Chilton's own hand," Phillips says.

"No one wants to be responsible for accidentally damaging an irreplaceable piece of history."

After preservation, the item is ready to return to its owner or come back to be stored at UNT for reference.

Users of the special collections include researchers who travel to campus from around the country and students looking for primary sources.

One such researcher is Byrd Williams IV, who donated his family's photo collection of more than 10,000 prints taken by four generations. Williams is working on a book about his family that will be published by the UNT Press in 2016.

He wanted to find out more about his great-grandfather, Byrd Williams, who lived in Gainesville. He found nothing when he first visited the city. Then the UNT staff found Gainesville newspapers from the 1880s and 1890s.

"These may have your answers," a staffer told him.

The newspapers featured advertisements for Byrd Williams' photography studio and hardware store. He was able to find where his great-grandfather's house and shop were located.

Williams was glad he chose to donate the family's collection to UNT rather than other colleges because UNT wanted the whole collection, which includes cameras, diaries, letters, negatives and other artifacts, intact.

Plus, he says, "It is a beehive of activity and they take care of me."

As UNT celebrates its milestone anniversary, the university archives take on special meaning.

Looking through the special collections, Gieringer comes upon a 1904 diploma from North Texas State Normal College. It is on parchment and she points out the officials' signatures.

"They had to sign them each by hand," she says. 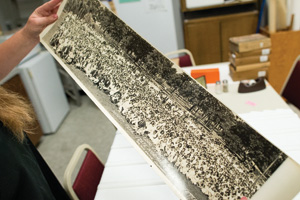 She looks at a class photo taken in 1915. Most of the students are dressed in white, with the women in long skirts and blouses and the men in white suits and straw hats. Band members posed with instruments, including a large drum.

Another photo is a series of oval-shaped portraits of students taken in the early 1910s. The students wear serious faces.

"You can spend a week back here looking through everything," Gieringer says.

UNT's archives document the history of the university with newspaper clippings, Board of Regents records and faculty papers. The documents of the UNT presidents range from one box for Chilton to hundreds of boxes for Hurley. The photography collection includes 6,000 images that have been digitized -- and the staff is not even halfway through uploading them all.

They keep catalogs, commencement programs, class schedules, scrapbooks, posters promoting upcoming events and even clothes -- such as freshman beanies and the bloomers that were part of an early women's P.E. uniform.

"Student life is an important part of university culture," Gieringer says. "Many of the things that make UNT so unique and provide such a memorable experience for students happen outside the classroom and are just as important for us to preserve as the official university records. Scrapbooks, letters, snapshots, class rings and club posters help us preserve the experience of students at UNT throughout the years."

Often, staffers will get a call from someone who was clearing out an older relative's home and found something for the university.

"It's really fascinating to see how things have changed over time," Gieringer says.

But technology is changing the methods rapidly, with email, social media and computer files replacing the hard copies of archival items that were used in the past. For example, the UNT budget and course catalogs are now produced electronically, so archivists will harvest the digital copies online and add them to the library.

"While our digital archival materials are more fragile than their paper counterparts and have to be meticulously preserved, backed up and stored correctly in our digital library, once they are preserved they are instantly available, making them much more accessible than items you can only view by visiting the archive," Gieringer says.

"The digital age has presented new opportunities for archivists to preserve history with so many ways for people to create and disseminate information," she adds. "In years past we focused only on collecting printed photos and documents, but now we have much more to consider."