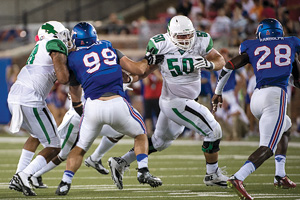 Led by head coach Dan McCarney in UNT's third Conference USA season, the Mean Green is the team to watch with its talented student-athletes. Wide receiver Carlos Harris, center Kaydon Kirby and placekicker Trevor Moore were named to nationwide award watch lists this summer: Harris for the Paul Hornung and Biletnikoff awards, Kirby for the Rimington and Lombardi awards, and Moore for the Lou Groza Award

Harris led the team in receiving yards, all-purpose yards and kick-off return yards and was second in punt return yards in 2014. He ranks in the top 10 at UNT in receptions.

Kirby, who started 25 straight games at center for the Mean Green heading into the 2015 season, is the first UNT center since 2004 to be on the Rimington watch list. He is the third straight Mean Green player to be named to the Lombardi watch list.

In July, the trio also made the 2015 C-USA preseason first team.

Preseason player of the year

A first-team all-conference selection in her first three seasons and C-USA's Player of the Year in 2014, the senior entered 2015 second in UNT history with 1,640 kills, third with 4,295 attacks and sixth with 1,031 digs. She led the conference in kills and total points in 2014.

UNT sophomore golfer Michael Cotton captured the 106th Texas Amateur Championship this summer. He is the third UNT player ever to win the prestigious title. Zach Atkinson won in 2004, and Joe Conrad won in 1951.

In women's golf, freshman Nyca Khaw was named a Women's Golf Coaches Association All-American Scholar for the 2014-15 season. She had a season-best finish at the Price's Give Em Five Intercollegiate and helped UNT to a fourth-place finish at the C-USA Championship.