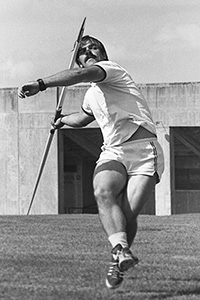 From the Jan. 6-12, 2014, SportsBusiness Journal/Daily, announcing its Class of 2014 Champions: Pioneers & Innovators in Sports Business:

Bill Schmidt ('70), the first Olympic athlete to be named a Champion, is more widely known in sports business circles as the sponsorship guru who helped invent sideline inventory as we know it today.

Having compiled one of the most unique and interesting careers in sports, if not any industry, Bill Schmidt is best known as the head of Gatorade sports marketing in the 1980s and '90s, a time of tremendous growth for one of sports' iconic brands. In different circles, he's known as one of America's greatest javelin throwers, a bronze medalist in the 1972 Munich Olympics and the only American to medal in the event in more than 60 years.

Along the way he's been vice president of sports at the 1984 Los Angeles Olympics and director of sports at the 1982 World's Fair, CEO of Oakley and owner of his own consultancy, as well as a teacher, coach, professor and serviceman in the U.S. Army.

Yet it was during his 15 years at Gatorade that Schmidt made his biggest contributions to sports, helping make sports drinks the endemic product they are today, from the "Gatorade bath" and the "Be Like Mike" campaign that helped create Michael Jordan as a marketing icon, to much of the sideline inventory that's now taken for granted.

Read more about Bill Schmidt's Thirst for the Deal. >>