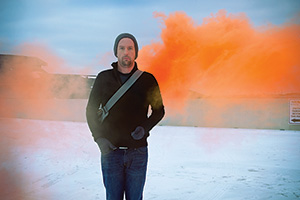 When it comes to his vivid photographs of colored smoke in everyday places, Irby Pace ('12 M.F.A.) battles the elements -- and himself.

But the work has received notice, appearing on the cover of the Dallas Observer and the German-based Emotion magazine. He is represented by Galleri Urbane in Dallas. Pace became obsessed with making the smoke photography work, often running back and forth between the smoke and the camera. Sometimes the wind would blow the smoke away.

"I just kept doing it," he says. "I had to make it work. I had to know. I couldn't give it up unless I made a successful photograph. If it works, I shot it. If it doesn't work, I shot it."

By contrast, he stumbled upon another one of his projects -- using the selfies people take on iPhone models at Apple stores -- which won the Observer's "Art Heist" award and was picked up by Wired magazine and the Huffington Post website. Pace says he was browsing at an Apple Store when he noticed the selfies on the phones. He felt compelled to keep them by downloading them to his iPad.

"These are amazing," he says. "Why am I not keeping them? I have to document them. What if someone erased all the cave paintings?"

Pace honed his photography skills at UNT, which he chose because of the strong reputation of the College of Visual Arts and Design. He especially appreciated Matthew Bourbon, assistant professor of studio arts.

"He just didn't take no for an answer," Pace says. "He knew how to push you to be a better artist."

Learn more about Pace's work and the recognition he's received. >>