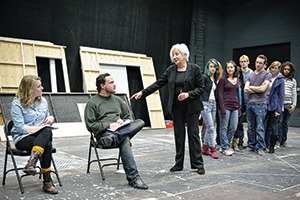 Dukakis held a master class for advanced theatre students, who performed Greek drama pieces for her to critique. The class was followed by a public forum at which she discussed her childhood and early acting days, as well as the roles she most loved and what it was like to raise a family while looking for work as an actress. That evening, she was the guest of honor at UNT on the Square for a forum.

"There's a thing called payback," says Dukakis. "You have to pay back to all the younger generations for the help you received when you were young."

Dukakis was invited to speak at UNT by Sally Vahle, associate professor of voice and acting. Vahle was selected as the 2011 fellow in the Lunt-Fontanne Fellowship Program. She met Dukakis there and has kept in touch with her ever since.