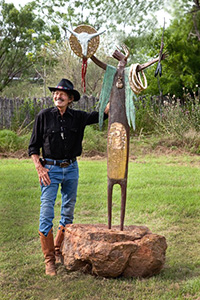 This is not a love story as one might think when one considers Feb. 14, but it is a love story -- and a true one.

Wilfred Higgins was my professor of art when I was a graduate student at North Texas starting in the summer of 1972. I needed a master's degree to keep my teaching job at Odessa College. He was a painting teacher and former director of the Dallas Museum of Art.

I had some fine ideas for paintings -- non-objective renderings and large ones, but I lacked the funds to purchase the necessary materials to be able to render them. I tried diluting the cadmium reds to extend them, which resulted in nauseating pinks rather than vibrant crimson colors. A similar thing would happen with the other primary colors, and this transformed my visions of intense renderings into weak, pastel appearances. I envisioned making creations that would impress Higgins, who we students came to affectionately call "Flip." I painted a few really bad canvases, weak, sickly and non-vibrant, and then it came time for my first weekly critique. I was scared.

In came Flip. He looked at what was hanging on the wall and said nothing, or very little, except that he would see me next week. I knew I had bombed and I was even more frightened. I thought to myself that if I were going to "bust out," I should at least do so creating what I really wanted rather than attempting to create something that would impress Higgins. So I spent money I did not have, bought what I needed, and painted and painted and painted, and painted some more.

Another week passed, and in came Flip. He stood before my array, silently. I was sweating when at last he broke the silence.

"I like that!" he said, pointing to several paintings. "I like that, and I like that!" I stopped sweating and he said, "You can paint anything you want from now on. Just paint."

He looked at one particular rendering -- a small study on a large canvas, a white field with vibrant reds and yellows, separated by intrusions of the ground -- and told me to paint some more like it. I said, "But Flip, I'm afraid I will repeat myself."

He said, "Think so? Try it. I dare you. One of the characteristics of a mature artist is that he paints the same thing time and time again. But nothing is the same. Everything is different, although similar. Try repeating yourself."

What a breakthrough! I roughly calculated that I painted a surface area of canvas that summer that would have covered 100 yards by 4 feet. Flip took me to the Dallas Museum of Art for an event opening. He introduced me to the director as "the best graduate student we have ever had."

There were other fine teachers at UNT, too, who supported and inspired me: Ray Gough, Don Scaggs, Richard Davis, Don Schol, Ray Stevens and others.

I have had a lot of love stories with UNT.

Worrell earned his M.F.A. in painting and drawing, with a minor in sculpture, and taught at Odessa College, at UNT as a doctoral fellow, and most recently at Houston Baptist University until 1989 when he left the classroom to follow his artistic pursuits full time. This year marks his 25th anniversary as a renowned Southwest painter, sculptor, songwriter, philosopher and author. His new book, Places of Mystery, Power & Energy, is a compilation of true stories, events, poetry, songs and photography about mysterious occurrences and historical happenings in the Southwest. He maintains studios in Santa Fe, N.M., and on the banks of Texas' Llano River. Worrell received the 2009 Ulys Knight Spirit Award, given to an alum who has made noteworthy efforts to sustain spirit among the UNT family.