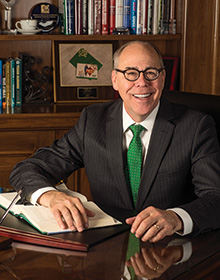 UNT's new president, Neal Smatresk, is a man of contrasts.

Smatresk, 62, grew up in a blue-collar part of Buffalo, N.Y., working for his father's construction business from age 12 -- summer and winter. Yet, he was a "science nerd," spurred on by the space race and the era of discovery in the 1950s to conduct homegrown experiments.

He eventually earned his bachelor's and master's degrees in biology and a Ph.D. in zoology, becoming a professor and studying how the respiratory neurobiology of vertebrates changed in the transition from water to air breathing.

Today, Smatresk is a natural-born administrator who leads by consensus, a big-idea guy who pores over the details. Yet his scientific curiosity and fix-it background are still what drive his leadership.

"In construction, you have a very practical workman-like approach and you get things done. In science, you solve problems and make discoveries, and it involves creativity," Smatresk says. "I learned discipline from my background, and that you start a job by just doing it and you solve problems as you go along."

Smatresk (pronounced SMAH tresk) solved one sticky problem before his tenure started. UNT played in the Heart of Dallas Bowl on New Year's Day -- after he had been appointed UNT's 16th president but before he had finished his presidency at the University of Nevada, Las Vegas. The Mean Green's opponent? The UNLV Rebels.

Get to know
Neal Smatresk

Watch and interview with Neal Smatresk on WFAA

On game day, Smatresk wore a red and green striped tie -- symbols that he was cheering for UNLV but pledging future allegiance to UNT. And with that deft, lighthearted handling of the unexpected bowl matchup, Smatresk and his wife, Debbie, endeared themselves to the UNT community.

Smatresk, who was UNLV president for more than four years and provost for two years, will focus on helping UNT to emerge as a nationally prominent research institution and a strong regional partner. He succeeds V. Lane Rawlins, who retired in February and is now serving as President Emeritus.

Smatresk has a proven track record of achieving a grand vision while focusing on the nuts and bolts and overcoming tough challenges. He strengthened UNLV's quality, reputation and impact and moved it closer to Tier One -- or national research university -- status while steering the university through tough state budget cuts.

He held campus listening sessions and reached out to community and business leaders -- moves that transformed UNLV from an "island" to a well-respected regional partner.

Having led an institution with qualities and ambitions similar to UNT's, Smatresk understands UNT's trajectory to reach the top tier and what it will take to get there. He leads the university when it has record enrollment and is making gains across the board -- from academics to research to athletics.

"President Smatresk's experience in leading a university similar to UNT combined with his knowledge of our region and state is powerful," UNT System Chancellor Lee Jackson says. "He is the right person to help UNT fulfill its potential and maintain its momentum."

As a leader, Smatresk focuses on student success, research and partnerships, and believes that access and quality are the hallmarks of a good university. Under his direction, UNLV completed a $537 million fundraising campaign that included creating the university's largest active scholarship program, established an Academic Success Center to help students graduate on time and opened Brookings Mountain West in partnership with the prestigious Brookings Institution.

Returning to the North Texas region brings the Smatresks' lives full circle. Living here puts them closer to their two grown children and their first grandchild and to Smatresk's career roots.

Smatresk's UTA career spanned 22 years and, in that time, he served as biology chair from 1994 to 1998 and dean of science from 1998 to 2004. Prior to joining UNLV, Smatresk was vice chancellor for academic affairs and deputy to the chancellor at the University of Hawaii at Manoa from 2004 to 2007.

His main focus now is to further UNT's value and impact.

"I want to build on our foundation, taking our attributes -- all of the things that make UNT great -- and matching them against the region's and state's needs to ensure that we are being a really great partner for communities and industry," Smatresk says.