Mean Green football's 2013 season culminated with a crowning victory in the Heart of Dallas Bowl at the historic Cotton Bowl on New Year's Day, making the entire Mean Green Nation proud. Before a sea of cheering fans and a national television audience, the team rolled to a 36-14 win over the Rebels of the University of Nevada, Las Vegas.

The victory capped an excellent season that began on a high note, celebrating 100 years of Mean Green football and the first year of play in Conference USA. Led by head coach Dan McCarney, the Mean Green made UNT the home team for the entire North Texas region.

The Mean Green's win in the Heart of Dallas Bowl on New Year's Day will go down in history as the beginning of a new legacy under McCarney.

The championship win -- UNT's first bowl win in 11 seasons -- also was a sweet victory for 22 Mean Green teammates playing in the bowl game as seniors.

See a photo gallery of the pregame events and the victory.

"I'm really proud of my football team," McCarney says. "I dreamed of the day these seniors could go to a bowl game and win. It's just a jolt of confidence, and something to really show for everyone's hard work."

The North Texas region celebrated the Mean Green win with pride. The Denton and Dallas city councils congratulated the team by presenting proclamations to UNT.

"The football program's successes this year topped with the tremendous support from loyal students, alumni and fans prove that the Mean Green is the team for the North Texas region," says Rick Villarreal, athletic director.

McCarney says the win leaves a lasting impression of what his players are capable of achieving through team work. Not long after his arrival in Denton, McCarney began talking about legacies and how the players could be remembered by future Mean Green teams for establishing the foundation on which a successful program is built. He says he is proud to have seen his players follow through, bringing the season to a climactic end and finishing one of the most historic campaigns in Mean Green history to earn a bowl invite. 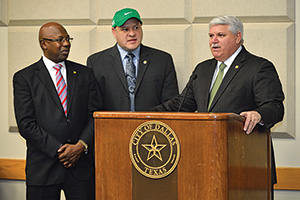 With the bowl win, the Mean Green finished the season with a 9-4 record. More than half of the Mean Green's games during the 2013 season (seven of 13) were against teams that went on to play in bowl games this season -- the most bowl teams UNT has ever played in a single season. The team won four of those games, the most victories for UNT over bowl-bound teams in a season.

"They achieved this by their daily actions with their behavior, with their class, with their leadership, with their pride and with their just never-say-die attitude," McCarney says. "We sent a message that this is a program that is clearly on the rise." 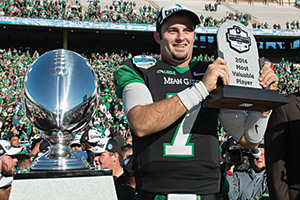 Mean Green quarterback Derek Thompson was named the Heart of Dallas Bowl's MVP, finishing his career on a high note at UNT and ranking second in school history in passes attempted, passes completed and passing yards. Thompson, who earned the 2013 Steve Ramsey Outstanding Player award, says the bowl game was a game changer for the Mean Green football program.

"It means the 2013 team will be remembered forever," Thompson says. "The atmosphere was electric, and being named the game's MVP really made it a game I will never forget."

The Mean Green will play the annual Green and White spring scrimmage at 2 p.m. April 12 and kick off the 2014 season Aug. 30 in Austin against the University of Texas. The home opener is Sept. 6 against Southern Methodist University. View the 2014 football schedule and to buy season tickets.