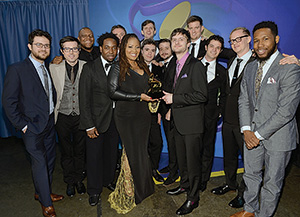 Michael League, the head of the jazz band Snarky Puppy, sat in the audience of the Grammy Awards in January as a nominee to hear they had won a Grammy award-- a long way off from the band's first gig in the basement of J&J's Pizza.

The 30-member band won for Best R&B Performance for its song "Something," with Lalah Hathaway, from its DVD/CD Family Dinner, Volume One. The band also has received international acclaim for its innovative combination of jazz, funk and world music.

"It felt unbelievably fulfilling," League says. "I use that word because this band has spent almost 10 years working harder than any other band I've ever seen in some of the least glamorous conditions you can imagine for a touring group."

Read more about Snarky Puppy and other UNT Grammy winners

League, who attended UNT from 2002 to 2006, formed the band with nine other classmates   as a student in the jazz studies program so he could play beyond traditional jazz.

They played gigs -- including a monthly stint at Greenhouse Restaurant -- where sometimes the only audience members were their friends. It released its first CD in 2006, then released a half-dozen others through the years. YouTube gave them bigger audiences, and they even recorded videos in Europe shot by videographers Andy LaViolette ('12) and Brad Holt ('09).

They've toured the country playing more than 1,000 shows by sleeping on floors and couches, enduring broken vans and making little to no money -- which made the Grammy win so meaningful for them.

"I'm glad that happened to a group of dudes who have worked their butts off to play original music," League says. "The win allows the band to enjoy a greater level of comfort on the road."

And they got to bask in the Grammy festivities.

"We met some of our heroes -- Quincy Jones, Smokey Robinson," League says. "It was amazing. We went to the official after-party and watched Boyz II Men, of all bands, perform. It was hilarious! Definitely took me back to my 7th grade dance. Afterward, we really just hung out together, instead of doing the schmoozey thing. I think everyone wanted to share the moment as a band."

League, who lives in Brooklyn, said the band will be making a record with the Metropole Orchestra and producing another Family Dinner record, and he wants to continue to working on original music.

League, who lives in Brooklyn, said he would like to make a record with a symphony and produce another Family Dinner record, but he wants to continue to make good music. It's what has kept the band members going during their lean years.

"Every single guy in the band is a music lover," League says. "They're obsessed with music and art. That's a stronger incentive than anything in the world."

Other alumni made their mark at the Grammy ceremonies. Cameron Beauchamp, who attended from 1998-2008, sings as part of the voice ensemble Roomful of Teeth that received the Grammy for Best Chamber Music/Small Ensemble Performance. Aaron Lington ('01 M.M., '05 D.M.A.) played saxophone and wrote half the compositions and Steffen Kuehn ('93) served as co-leader for the band Pacific Mambo Orchestra, which won Best Tropical Latin Album for its album Pacific Mambo Orchestra.

Seth Shafer, a doctoral student in music composition, performed the tuba for Vampire Weekend's Modern Vampires of the City, the winner for Best Alternative Music Album.

Three alumni – Nathan Carlisle, Juhwan Lee and Dustin Lucas – took part in the chorus of the recording of The Tempest from the Metropolitan Opera Chorus that won Best Opera Recording.