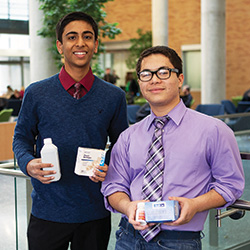 With finals right around the corner, Texas Academy of Math and Science  students Alberto Him, 17, and Arun Yagnamurthy, 17, stood in the atrium of  UNT's Business Leadership Building selling boxes of over-the-counter cold and flu medicine last December to help raise funds for their nonprofit, EverCare Medical Foundation. While the boxes' contents were donated by a local Wal-Mart, medical supplies are not so easily acquired in Venezuela, which is precisely the reason the two started the philanthropic company.

EverCare Medical seeks to raise money for nonprescription medicine and medical equipment to donate to underserved hospitals and clinics in Latin America. The company was founded last August and has since donated $3,000 worth of medical supplies to the Corporacion De La Salud Estado Miranda Casa Amigas De La Salud (CEMO) clinic in Caracas, Venezuela.

Him, the company's CEO, and Yagnamurthy, CFO, originally met in middle school, attended North Hills Preparatory, a charter school in Irving together and both enrolled in TAMS, the nation's first residential program for gifted high schoolers to take research-oriented college classes while earning a high school diploma.

"We're pretty much UNT freshmen with a curfew," says Yagnamurthy, who admits to staying up late studying and working on projects for his many extracurricular activities on campus. His duties as EverCare Medical's CFO require as much time as a part time job.

Although the students didn't always know they would start their own nonprofit together, they both had a drive to make a difference in the world. Yagnamurthy, is an Eagle Scout and an aspiring philanthropist.  And Him, who was born in Venezuela, says he wanted to be a surgeon since he was five years old. Him's aunt, a doctor in Venezuela, has been an inspiration for him and encouraged him to pursue his dreams since he was a child.

"When I was seven or eight years old, my aunt took me to the hospital with her. I noticed that at a certain point, she couldn't accept any more patients," says Him, who was burdened to see people leave the clinics without treatment.

As he grew older, he started to understand that this in part is because of the lack of medical supplies available to clinics in Venezuela, which causes many patients to suffer. Today it's not uncommon for citizens to lack basic necessities, such as clean water, sugar or flour, and the political unrest contributes to a lot of violence and danger in many areas of the country.

Him's family moved to the United States when he was 12 years old and although he no longer lives in Venezuela, he still wants to help change the medical landscape for the better and to provide relief that can impact the society.

"Americans really love their country and don't accept mediocrity," says Him. "I really want to help my home country, Venezuela."

The road to completing the business plan and bringing it to life was not easy. Luckily, TAMS provided many resources and faculty mentors to help EverCare Medical transition from an idea into a reality. After many visits with Nancy Hong, executive director of Innovation Greenhouse, and Tony Mendes, director of the UNT Murphy Center for Entrepreneurship, EverCare Medical began to take shape. Hong was instrumental in helping the pair develop the company's executive business summary and Mendes, who teaches their social entrepreneurship class, offered inspiration for fundraising tactics to mobilize the organization.

"We can walk into [Nancy's] room whenever we want and she'll make time for us," says Yagnamurthy.

The duo also entered the idea of EverCare Medical into the Murphy Center's IDEA competition and won $250 in seed money toward the nonprofit's mission. In addition, the business plan was recognized in the Innovation Greenhouse's IDEA Fest, earning $150, which was used to fund the company's license, website and travel expenses for the first round of donations.

Once the concept and plan was in place, Him took EverCare Medical's first donation trip to Venezuela to visit the medical suppliers' warehouse and deliver $3,000 worth of antibiotics, otoscopes, gauze and oxygen masks to the CEMO clinic last December through January. In addition, he worked as an intern and had the opportunity to assist surgeons during 12 different procedures during the four and a half weeks he spent in Caracas.

While Him was in Venezuela, Yagnamurthy was on a philanthropic mission in Mexico to help children whose village was destroyed by Hurricane Manuel. With a team of fifteen students and philanthropists, Yagnamurthy helped restore school buildings and delivered Christmas gift bags to children, many who had never received presents because of their village's suffering economy.

"It was one of the most rewarding experiences of my life," says Yagnamurthy, who hopes to have a successful career and retire early and lead philanthropic trips of his own in developing countries to help people in need.

Him and Yagnamurthy have set a goal to raise $10,000 by May 2014 to triple the first trip's efforts in medical equipment donated for the Venezuelan CEMO clinic, which they hope to deliver in June. Although fundraising is never easy, Yagnamurthy says they recently partnered with UNT sororities and fraternities on campus and have been encouraged by the members' desire to help.

"When we succeed, we're reflecting the product of UNT," says Him. "With help from our community, we can offer hope and change lives one box at a time."

To find out more about their mission and help EverCare Medical reach their goal. >>

Meet the international runners who made up the 2014 cross country team. Hear their perspectives on being in the U.S. and part of the Mean Green family.

Anam Bakali, a senior photojournalism and interdisciplinary art and design studies major, earned a highly prestigious Critical Language Scholarship from the Bureau of Educational and Cultural...

UNT was ranked among the top 50 institutions for hosting international students in the Institute of International Education’s <em>Open Doors 2011</em> report. About 2,500 international...