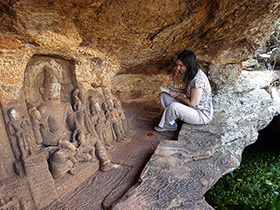 UNT professor Lisa N. Owen is writing her second book on ancient religious practices in India. Her first book, Carving Devotion in the Jain Caves at Ellora, re-contextualizes medieval Jain artistic and devotional practices at the rock-cut site of Ellora in India.

Owen, an associate professor of art history, began teaching at UNT in 2006 and is a specialist on India's rock-cut monuments. Owen's current book project, Rocks, Caves, and Divinity: Creating Places of Worship in Medieval Southern India, attempts to bring scholarly attention to some understudied monuments in southern India. By doing so, she hopes to broaden the canon of India's rock-cut monuments and challenge the current methodologies employed to study them.

Owen is one of a few professors in the US who teach ancient Indian art history. Compared to her colleagues who work on European and American art, Indian art historians are in a younger but growing field.

"Hopefully there will be budding art historians who come out of my classes who want to focus on the art of India and seek employment at other universities that don't have someone working in this specialization," Owen says. "As long as universities are willing to have us our field will grow."

Owen's research focuses on ancient and medieval rock-cut devotional spaces carved into mountains. These spaces have been left out of the scholarship on Indian temples because they are hard to classify strictly as architecture. In other studies, only the carved imagery at these sites is highlighted.

According to Owen, "these approaches have resulted in classifying these monuments as either architecture or sculpture, which is highly problematic. Clearly these monuments function foremost as sites of devotion, so in order to understand them better we may need to abandon the traditional categories of architecture and sculpture that are often found in art historical study." 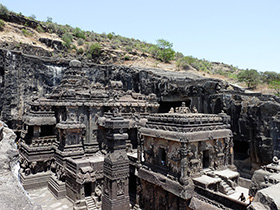 The sites under study in Owen's current book project are natural rock formations that are carved with images of deities across their expansive surfaces.  Rather than being built from the ground up, these sites remain an intricate part of the natural landscape. Researchers in the past acknowledged the sculpture at these sites, but they have not explored how they articulate a powerful place for worship.

"What does it mean if you are defining a place of worship by carving imagery on the surface of rock?" Owen asks. "You aren't creating what art historians typically classify as a 'temple' because you can't go inside and there's no shrine-it's just a number of images…Since they don't replicate architectural features what do you do? How do you compare these sites with traditional temple architecture?"

Another reason these sites fall out of many studies is because they are often multi-religious. When researchers study Indian devotional spaces they tend to concentrate on only one religious tradition. At one site Owen may see carvings from different religions. There may be a section where Hindu deities are carved and next to it may be Buddhist deities.

"Many art historians focus only on one religious tradition, but Indian art wasn't created in a vacuum like that." Owen says. "Instead of having isolated areas of worship, India's religious communities often created worship spaces adjacent to one another in recognition of the sanctity of the mountain or rock formation."

What's in a name? 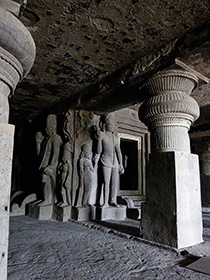 If these powerful places of worship function beyond the restrictions inherent in their identification as 'architecture' or 'sculpture', what do we call them? For now, Owen calls them 'rock reliefs.' That is their technical name because only the surfaces of rock are carved with figural imagery and limited architectural elements, but Owen says in the future she will need to come up with a new terminology to describe them.

"I could simply call them sites of worship because they primarily serve a devotional purpose but that doesn't fully explain things either." Owen says. "They also serve as places of residence for local ascetics, as places of religious instruction, and as sites of memory and identity. My work wants to challenge the idea that we can categorize these monuments simply as ancient examples of sculpture and architecture. They function as more than that."

Funding for art and research

Some questions Owen wants to answer are about the motivations to carve these places into rock formations instead of building them. Could it be that it was a more economical approach? Researchers used to think it was more efficient to build a temple instead of carving one, but recent studies have shown it is more practical to carve a space than to build it because the material (the mountain) is already present. Many of the gods in Indian religious traditions reside in the mountains, and a devotional space located in the god's natural environment can add to that experience of worship. Perhaps these sites added a complementary worship experience to those encountered in built structures.

"It's just a different environment compared to more traditional spaces," Owen says. "Instead of going inside a built structure, the rock reliefs provide a devotional space open to the outside world."

The few, the proud

Owen is one of a few researchers studying medieval Indian rock-cut sites who can teach the history of this artistic tradition to students and advance the state of the field.

Along with determining a new classification system for this unique religious art, Owen hopes people will re-consider the standard historical narrative of southern India.

"The period and region I'm currently working on is characterized as a time of great tension between religious communities," Owen says. "But I'm looking at these monuments created and sometimes shared by different groups and that's making us re-consider the nature and complexity of these encounters."

Students in school now tend to gravitate toward the field of modern art, but Owen believes there is a need for scholars to research the ancient period to make connections between ancient art and modern art and sculpture.

"That's why I work on the periods that don't get as much scholarly attention, so we can look back on the past and see what questions artists were challenged with and make those connections."

She says that without looking at the past, those who study modern art will not have a good foundation upon which to build their knowledge.

"Life today is messy and life in ancient India was messy," Owen says. "We have to embrace that and then see if we can disentangle it and see the similar complexities we have now in modern culture that were addressed in ancient cultures too."