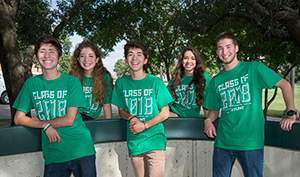 When many incoming freshmen arrive on campus, they have to navigate a big campus on their own.

But the children in the Diaz family -- all five of them -- had each other when they began classes at the University of North Texas this fall.

One of UNT's four bold goals is to provide the best undergraduate experience in Texas, and the Diaz quintuplets believe they found it here. The siblings -- Emilio, Enna, George, John and Maria -- say they chose UNT for its wide array of majors and amenities and the 40-minute distance to their hometown of Keller.

"It's close to home and they have nice programs," George says. And that's important as they mark this milestone.

When it came to going to college, the siblings all wanted to attend the same school.

"It's much easier," George says. "We usually take care of each other."

The quints, who were born in Houston, graduated from Keller High School in June. They chose UNT during their senior year after they attended the UNT Express recruitment event in Southlake. They also toured the campus several times, and they were wowed by UNT's environmentally-friendly atmosphere and the Pohl Recreation Center, which boasts basketball and volleyball courts, indoor track and pool and a climbing wall.

"All of those things are pretty cool and I would like to go there more often," Emilio says.

Admissions officer Rebeca Perfecto ('12) helped the family with application forms and other questions. The brothers are all majoring in business, inspired by their parents Jorge and Enna who both hold a degree in business with a major in computer science. Maria is studying graphic design, while Enna is focusing on pre-medicine/biology.

In the summer, they attended the mandatory three-day orientation session, where incoming students learn about university courses, policies and academic expectations and pre-register for classes. They also attended a fair featuring student organizations and learned UNT traditions like how to make the Eagle claw. Enna talks about how exciting the sessions were and how it made going to college seem like it was really going to happen.

"It really pumped you up," she says. 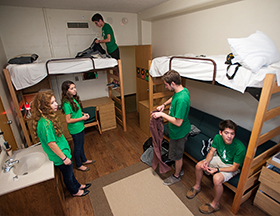 UNT was ready for the Diaz quintuplets ― and 4,000 other students ― as they moved into their residence halls on Mean Green Move-In Day Aug. 17. The brothers ― who share a room with three bunk beds, desks and a sofa ― were greeted by their residence advisor, sophomore rehabilitation studies major Eleazar Hernandez, who let them know about First Flight, the welcome week program for new students. They all attended the Distinguished Lecture Series event featuring Apple co-founder Steve Wozniak, and watched a screening of The Amazing Spider-Man 2.

"These activities helped me make new friends, prepare for the school year and, of course, get comfortable in my new home," Emilio says.

They are looking forward to attending football and basketball games, Homecoming and the events sponsored by the University Programming Council. They're already prepared for Mean Green Pride Days, when students, faculty and staff go to work and class decked out in Mean Green attire.

"By now I have too many UNT shirts to keep track of because of all the free ones they have handed me," Emilio says.

Their parents and their 14-year-old brother Sebastian helped the quintuplets unpack as they unbundled their clothes and the bedding supplies they had bought the day before.

"I've never been in a class without one of them," she says. "It's going to be different. I'm going to meet a lot more people."

Enna is taking on a challenging course load ― with biology, sociology, technical writing and probability and statistics.

"It's hitting me that we're not in high school anymore," she says.

The quints were prepared as they tackled their first day of school. John attended his U.S. history and college writing classes – making sure he was there on time as he made his way around the packed campus.

Maria added, "Walking around campus made me realize that I really need a bike."

Maria is already working hard on her assignments for her art classes, including one that tests students' ability to see the negative space around objects.

"I got the impression that the classes were going to test and improve my skills that are needed to get into their program," she says.

The siblings say they're interested in exploring UNT's 400 student clubs and organizations, but haven't decided to join anything just yet.

"I want to get the hang of everything," Enna says.

Their parents are glad their children are at UNT – noting they've received the same help from campus officials that they've received from their family, friends and neighbors over the years.

"UNT is one of the best universities in the state and offers the majors that the kids were looking for," Jorge says. "Since we are very close to the quints, we considered the UNT distance from home, and it will give us the opportunity to see them very often. UNT's personnel opened their arms to our kids and we feel that they adopted them and now we can say that they are the UNT Quints."