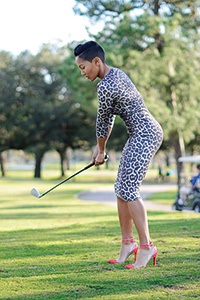 Maggie Noel ('10) is determined to grow the game of golf.

But it's that edge coupled with her trendy fashion sense and hip teaching style that she uses to help attract a new, more diverse crowd to the sport.

"I don't fit the mold," Noel says. "And a lot of people really like and gravitate toward my style and find it not just OK to play the sport, but accessible and cool at the same time."

After struggling with performance anxiety, the 26-year-old Houston resident and former UNT golfer began marketing her style of teaching as "Maggie's School of Golf" in 2013, offering lessons and developing a social media following. As she gained attention for her teaching style, The Houston Chronicle named her one of four "creative faces to watch in 2014."

Her golf career began at age 6 after someone on the golf course pointed out her natural ability to her dad. She went on to play, and excel at, junior golf ― winning tournaments and later state championships in high school.

She received a scholarship to play Division I golf at UNT in 2006. She says she chose UNT because it was a great school. It also offered her something a little different from other schools and had a better golf program.

Noel graduated with a degree in business administration and decided to put away the golf clubs after struggling with performance anxiety while in college.

After a short stint in Los Angeles to pursue modeling and acting, she returned to Houston and later gave golf another shot. In just her second tournament after taking a year off, she won the top prize as the Women's Texas Golf Association's State Amateur Champion in 2011. She was back in the game, but the performance anxiety soon returned.

With her body not cooperating, she looked at other options. Starting a business where she could teach golf seemed like a natural fit.

"I started teaching, and I noticed that I had a really, really neat niche," she says. "I connected with people you don't necessarily see out on the golf course."

She says she developed a following on social media among African American women, and even some men, who wanted lessons. She began offering a ladies clinic to expose women and girls to the game.

"A lot of them aren't picking up these invitations to go play golf with their colleagues or bosses because they simply don't know how to play the sport," she says.

There's no pressure and no overly technical information during a lesson. The ladies clinics offer women fundamentals and some lingo.

"I'm very, very understanding, and I'm passionate," Noel says. "You get excited when you hit a good golf shot. That excites me."

In addition to offering her Maggie's School of Golf instruction, this year Noel also became a full-time instructor at GolfTEC in Houston. She says she plans to continue her ladies clinics with the help of GolfTec.

And, she draws on her business administration degree from UNT to run a tax preparation business in addition to her golf instruction business. She also volunteers with The First Tee, a junior golf program she participated in as a child that focuses on life development through golf.

While the performance anxiety that surfaced in college changed the course of her career, she says her time at UNT was a time of figuring out herself and her purpose.

"UNT definitely played a role in my career and a chapter in my book," she says. "I don't take any of the moments for granted."

She stays in touch with UNT women's golf coach Jeff Mitchell, who she says has done a phenomenal job with the golf program. Even as she struggled with anxiety, he saw something in her, she says.

"He would always tell me you have the picture-perfect golf swing," Noel says. "He knew that I was battling something. He would have me do certain drills to try to combat it, but I couldn't shake it."

She says her anxiety affected her putts that were 10 feet or closer, even tap-ins.

"Even to this day, Coach Mitchell and I email each other. I tell him what I'm up to, tell him what I'm doing and he always says he's proud of me, he's happy for me, because he knows the pain that I endured. He's seen the tears, but he also saw the great swing and the dedication and the sacrifices that I made to really try to get over it."

Noel does miss being a golf competitor but says she feels good about the role she's playing in the sport now.