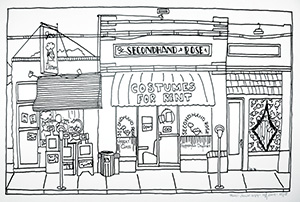 I imagine a lot of alumni who were students in the early '80s will remember that the coolest place in Denton to get breakfast was Jim's Diner. A short walk from campus up Fry Street, Jim's was a favorite spot for all kinds of people – pretty much anyone who loved abundant coffee, good food and a quirky atmosphere.

Jim and Judy Smith actually ran two businesses there, connected inside by a narrow doorway. Jim operated the diner, which was tiny and dark and eclectic and spilled some booths into Judy's business next door. Judy was the boss at Secondhand Rose, where she sold used clothing but also rented innovative and amazing costumes she made by hand.

I was lucky enough to work for both of them for a while after I graduated. It was during that time fellow "Dinette" Shawn Eichmann, an art student, painted her life-size diner mural on the outside wall, featuring an excellent likeness of Jim in its open door. (For anyone familiar with it, she had trouble with a vandal who kept smearing out Paul McCartney's face. She had to repaint it a couple of times, and finally taped a note over it that said, "If you have a problem with me, come see me. If you have a problem with Paul McCartney, go see a psychiatrist.")

Jim sold the diner a few years later and went to work in the Union on campus. I feel certain he was as loved at the university as he was on Fry Street. Judy had already moved Secondhand Rose and the last I heard is still in business.

They were terrific people, kind and generous and fun – the best bosses I ever had. Jim passed some years ago now, and I understand that row of buildings on Fry Street was razed to make way for something new. That's the way of things, I suppose, but it makes me doubly glad I did this drawing for them back in '86, sitting on a car across the street, with my sketch pad in my lap. Hopefully it will bring back good memories for others as well.