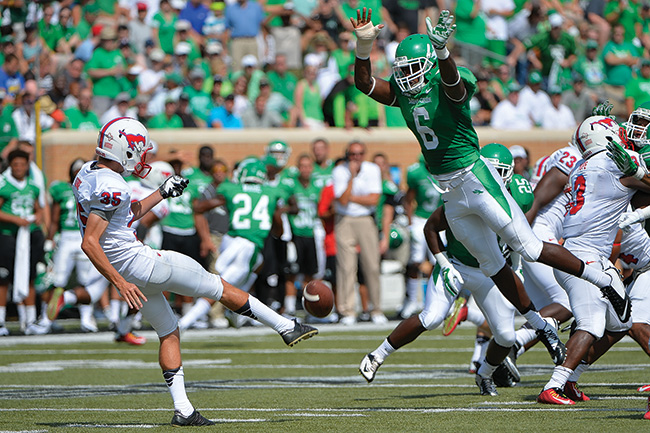 Football season is here. And the Mean Green -- the 2014 Heart of Dallas Bowl champions -- are competing in another exciting season in Conference USA in hopes of clinching a second consecutive bowl victory. Led by head coach Dan McCarney in their second C-USA season, the Mean Green are the team to watch, with players who are talented athletes and students.

Join the team this fall to show your green pride at home games in Apogee Stadium and at away games around the state and country. And don't forget to join the campus community

Nov. 8 for Homecoming festivities, celebrating this year's theme, "Mean Green Circus, the Greatest Homecoming on Earth," and the game against Florida Atlantic.

Also, the UNT women's swim team received the College Swimming Coaches Association of America's Spring Scholar All-America Team Award for having one of the top GPAs in the nation in 2014 Division I women's swimming and diving.

Cheer at away games

Come out and help fill the stands at away games this football season to show support for the Mean Green. And arrive early to participate in tailgating festivities for alumni and students. Our 237,000 alumni in the Dallas-Fort Worth area can help alumni across the state rally the Mean Green to victories when the team plays Rice in Houston Oct. 25, UTEP in El Paso Nov. 15 and UTSA in San Antonio Nov. 29.

The more green in the stands during these games, the more our rivals and the television audience will see the Mean Green Nation has strength on the field and strength in numbers.

Learn more about pregame and gameday festivities and events

and the University of North Texas Alumni Association.

Senior linebacker and kinesiology major Derek Akunne was one of the reasons the Mean Green football team had the highest GPA in Conference USA last fall and a 9-4 record.

Read more about Akunne and why he chose UNT.