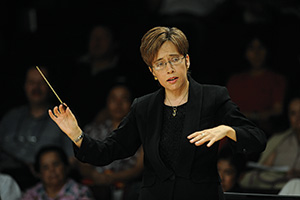 Described by many as a "natural," she says becoming a conductor was the easy part. The challenge was fitting within a world where some people did not necessarily want women on the podium.

In 2009, Díaz-Alatriste received a surprise phone call from leaders with the Symphony Orchestra of the National Polytechnic Institute in Mexico. The previous year, she had been invited to guest conduct with the orchestra during a performance which included Leticia Armijo's A tus recuerdos and Georges Bizet's Carmen Suites No. 1 and 2 for International Women's Day.

Now, they were looking for a new conductor.

She was shocked to get the call. Living in Minnesota after the completion of her doctoral degree at University of Minnesota in 2003, she had applied for several conducting positions across the U.S. and Mexico. But that orchestra wasn't one of them. Furthermore, she was agentless. Without someone actively promoting her career, she knew that her reputation as a conductor was probably the only thing that caught the search committee's attention.

During the interview process with the National Polytechnic Institute, members of the symphony voted on whether they wanted Díaz-Alatriste to take up the baton with their organization. A majority was in agreement to have her as one of the possible candidates, but she assumed she was not truly being considered for the position.

"Women's names sometimes make lists because they have to be there," says Díaz-Alatriste, explaining that in Mexico, as in some other parts of the music world, people do not always take a woman's name as a principal conductor applicant seriously. "It's tremendously hard to break the glass ceiling in conducting."

Hard, even in modern times.

The world famous Vienna Philharmonic didn't accept women until 1997, and it wasn't until 10 years later that Marin Alsop became the first woman to head a major American orchestra as the music director for the Baltimore Symphony Orchestra. The League of American Orchestras says about 20 percent of current U.S. conductors are female.

Some believe that negative attitudes and comments contribute to the lack of women in the conducting field.

But Díaz-Alatriste is part of a new generation of women conductors beginning to make their marks.

"She is highly beloved in Mexico and has earned respect," says Arturo Ortega ('95, M.M. '97, D.M.A. '02), supervisor for music acquisitions and processing at the UNT Music Library, who studied alongside Díaz-Alatriste while they were both at UNT. "She knows her stuff, and she knows exactly what she wants."

That aura of confidence may have been what helped her earn the job with the National Polytechnic Institute.

"I couldn't say no," Díaz-Alatriste says, laughing. "Many women do not conduct because the opportunity is not readily available. You have to prove yourself in order for doors to open."

Making of a maestro

Born in Mexico City into a family with six children and music-loving parents, Díaz-Alatriste began playing guitar by ear and piano with her mother, who also played by ear. At 11, Díaz-Alatriste enrolled at the National Conservatory of Music in Mexico.

She practiced piano for hours on end, often missing family functions to rehearse, and soon asked local conductors if she could shadow them during rehearsals and performances.

"Watching the conductors on stage while singing as a member of the chorus during a performance of Gustav Mahler's Symphony No. 3 was when I realized what I wanted to do," she says.

In 1988, Díaz-Alatriste apprenticed with then music director of the Dallas Symphony Orchestra, Eduardo Mata, and met the Dallas orchestra's former conductor Anshel Brusilow, director of orchestral studies in UNT's College of Music from 1973 to 1982 and from 1989 to 2008, asked if she wanted to audition for UNT, where he would be returning to teach that year. She agreed. With one day's notice, she auditioned with Symphony No. 6 Pathetique by Tchaikovski and was accepted to return the following year to study with Brusilow.

"To win a contest, you have to have the confidence you are going to win," she says. "So I walked in to the audition like I'd already won."

Accepted into UNT's program, Díaz-Alatriste flourished throughout the next few years. While working on her undergraduate degree in music theory, she made her conducting debut in March of 1993 as guest conductor with the Xalapa Symphony Orchestra. There, she received the highest award given in the First National Competition for Conductors in Queretaro, Mexico.

"Her ability was instinctual," says Brusilow, remembering the time he spent as her major professor. "And she had a strong sense of confidence that's rare."

Recalling UNT's role in her career, Díaz-Alatriste says she is proud.

"I studied music in Mexico, but I learned to be a conductor in the states," she says, adding that instructors like Brusilow helped her grow her talents. "I'm very grateful for that, and I tried to do my best as a student to really take the opportunity to do everything as best as I could."

In his courses, Brusilow would challenge his students to "play above their heads" -- not let their insecurities get in the way of their musical performances. He says Díaz-Alatriste never had that problem.

"Gabriela was like a sponge and absorbed everything I told her," Brusilow says. "Her talent was amazing. She had charisma and a certain way of handling the baton and controlling the players. When she was on stage, you knew who was in charge."

After completing her UNT degrees and spending summers at the renowned Pierre Monteux Memorial School in Maine, she earned her doctorate. While her talent went almost unquestioned, succeeding as a female conductor in a male-dominated field was a challenge.

During her first year with the National Polytechnic Institute, Díaz-Alatriste says that some in the orchestra did not want a woman in the lead role. Some members complained about her selected repertoire's focus on women.

But little by little, Díaz-Alatriste says, things began to change.

"When I took that position, I knew there was a lot of room to grow the orchestra both musically and artistically," she says. "Our organization needed to be more disciplined and to work harder during rehearsals. So I began to set new goals."

Knowing the ensemble she wanted to create, she standardized the rehearsal schedule, experimented with more challenging repertoire and worked with the ensemble's musicianship, such as improving pitch and the execution of music, and filled many vacant positions.

By 2010, the changes paid off when the group received the "Las Lunas del Auditorio" award in the traditional music category for its performance with singer Susana Harp.

And each year from 2009 to 2013, Díaz-Alatriste led her ensemble in programs for International Women's Day.

Díaz-Alatriste maintained her position with the National Polytechnic Institute until July 2013. The next month, she was invited by Enrique Bátiz, founder and conductor of the Estado de Mexico Symphony Orchestra -- often considered the premier orchestra in that country -- to interview for its assistant conductor position.

As the interview process continued, a last-minute cancellation left the orchestra in need of a guest conductor. With less than one week to prepare, Díaz-Alatriste found herself stepping in to lead the program, which included Dmitri Shostakovich's Cello Concerto No. 1 and Hector Berlioz's Symphony Fantastique.

After that night, Bátiz offered her the job.

"It is a very prestigious orchestra," says Díaz-Alatriste. "It is among the very top of the orchestras in the country, and I feel honored to work with such high-caliber musicians."

While Bátiz remains the ensemble's primary conductor, as general artistic director, Díaz-Alatriste fills important roles such as helping the Maestro to do the programming for the orchestra seasons, and  leading rehearsals and substituting for Batiz,

This time when she takes the maestro's baton, there is no resistance from the orchestra.

"I like being here," she says. "I think I can grow in this organization in what I really love: making music."

That ability to take charge is something Díaz-Alatriste says all women must work on in order to thrive in their careers, no matter what field.

"To any younger woman who wants to become a conductor," Díaz-Alatriste says, "I always say she should go for it."