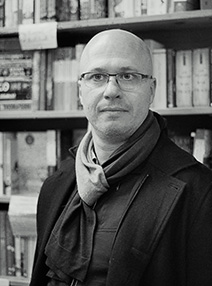 One of the literary world's most acclaimed writers will serve as the 2014-15 artist-in-residence for UNT's Institute for the Advancement of the Arts.

Aleksandar Hemon, whose 2008 novel The Lazarus Project was a finalist for the National Book Critics' Circle Award and National Book Award, will visit the campus five times during the academic year. He will work with creative writing students, give lectures and use UNT's resources to complete his own work.

In the spring semester, the institute plans to host a UNT on the Square exhibition of the photographs taken by Velibor Božović that were featured in The Lazarus Project.

Hemon is a native of Bosnia and Herzegovina who lives in Chicago. He has received the MacArthur "Genius Award" and a Guggenheim Fellowship.

"He has an outlook and personality that lend themselves well to a university community," says Herbert Holl, director of UNT's Institute for the Advancement of the Arts.

Hemon adds, "Every writer looks for readers. I like talking to people, testing my ideas and having my ideas challenged."