Read more
about The
Campaign for UNT 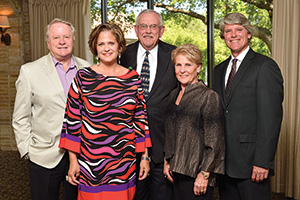 The light is green. The time is now. The Campaign for UNT. More than 100 alumni and friends have dedicated time, energy and resources to advancing UNT's mission to serve its students with top-quality faculty and programs. (Learn more about the campaign)

"Who better to tell our story than our strongest champions?" asks Michael Monticino, UNT vice president for advancement. "Their longstanding passion for UNT sets the example for new generations of alumni and friends.

Frank Bracken's ('63) campaign leadership began in 2007 because the campaign supported his belief in UNT's strategic goals. Bracken retired from Haggar Clothing Co. in 2005 after a 42-year career with the company, joining as a management trainee and retiring as president.

Community volunteer and UNT student Janet Bracken is not an alumna yet, but she calls herself an "alum of the heart."

"I didn't fall in love with Frank Bracken at UNT, but I fell in love with UNT because of him," she says. "I am proud to be associated with a place that cares so much and means so much to so many people."

She serves on the Dallas board of Big Brothers Big Sisters. Working on a bachelor's in applied arts and sciences, she often meets classmates who chose UNT because of the strength of its programs and its reputation in the North Texas region.

Vice chair of the UNT System Board of Regents, G. Brint Ryan ('88, '88 M.S.) is chair and CEO of Ryan LLC, a global tax services firm. He has given more than $1 million to support the College of Business' accounting program and supports other areas such as scholarships, the Emerald Eagle Scholars program and UNT's Apogee Stadium.

Ryan says he is living proof of the transformative power of education. He counts himself among those who started with little and succeeded with help from UNT.

"When it comes to providing our region with a professional workforce, no other institution of higher education can match UNT's impact," Ryan says. "Each academic year, UNT graduates more than 8,500 new professionals who are driving the economic prosperity of our region."

Gayle Strange ('67) has stayed connected to UNT since she arrived as a freshman in 1963. She and her husband, Virgil ('68), own Axiom Construction Co., a commercial construction firm in Denton. Appointed to the UNT System Board of Regents in 1997, she served as chair from 2007 to 2009.

Strange says the goal of the campaign is to create superior learning experiences for students.

"We're here to help every student reach their very best potential," she says. "The inherent value that's here, our attitudes on student success and our marvelous faculty, are proving that we want to be the very best we can be."

The Campaign for UNT strengthens support for students, faculty and programs. Every gift signals that an investment made in UNT is an investment in the future. The Campaign for UNT supports student scholarships and programs; funds innovation; builds athletic champions on and off the field; advances leadership in the arts; and accelerates education in the sciences, technology, engineering and mathematics. These donors agree that the light is green and the time is now to invest in UNT. 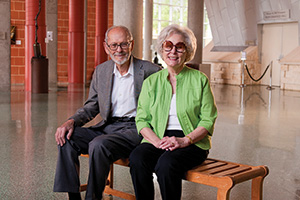 As busloads of middle school students streamed into UNT's Murchison Performing Arts Center for a spring band festival, donors Horace, left, and Euline ('74 Ph.D.) Brock, right, observed the scene, happy to be surrounded by what they love: the Murchison, with its grand lobby — bearing their names — and young musicians.

UNT's College of Music holds a special place in their hearts. In 1954, as new faculty members, the Brocks met at UNT and attended concerts on dates.

"It's always been so central to us," Euline says. "We give out of gratitude, but also because people around the world know about UNT because of the College of Music." 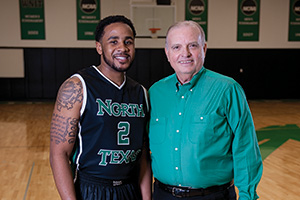 Ernie Kuehne Jr. ('66) and the members of UNT's Basketball Committee secured more than $3 million in 30 days for Mean Green Athletics, funding a new basketball training facility and a state-of-the-art scoreboard in the UNT Coliseum while providing additional support for scholarships. As part of that campaign, Kuehne, at right with senior student-athlete Brandan Walton, presented the athletic department with a cornerstone $1 million gift.

"I care deeply for this university because it shaped me as a person and prepared me for life," Kuehne says. "I am not alone. Our effort proved that a lot of people believe in UNT and credit the education they received here for their success in life." 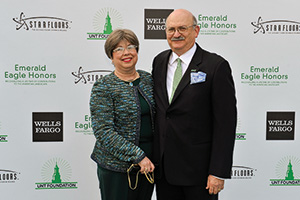 Neither Bette, left, nor Bob Sherman, right, attended UNT, but their ties to the university run deep. Bob's father spent more than 30 years as a UNT professor and administrator. Bette developed her bond when staff members helped her review and archive the historic military documents of her father, the late Maj. Gen. Olinto Mark Barsanti.

The Shermans gave $350,000 to establish the Sherman/Barsanti Inspiration Awards, a competition designed to showcase student creativity. Part of UNT's Innovation Greenhouse, any original project, invention, composition or artwork is eligible.

"Students need to be encouraged to think outside the box," Bob says. "Great ideas emerge when we give them freedom to explore and create." 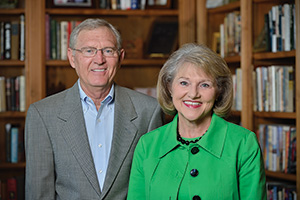 Cathy Bryce ('91 Ph.D.) volunteers for The Campaign for UNT because she believes "those of us whose lives were transformed by this university have an obligation to ensure that those same opportunities are available for future generations."

Bryce, right, and her husband, Jack Atkins ('66, '69 M.S.), left, earned three UNT degrees and two professional certifications between them. They established a College of Education scholarship in memory of their mothers, who believed education opens doors.

"Jack's mother carried him as a baby in her arms to enroll him in UNT's lab school," Bryce says. "I remember my mother, who became a widow when I was 2 and my sister was 4, showing me her savings book and saying, 'This is your college fund.'"

Chris Pearce ('90) earned bachelor's degrees in both computer science and English composition and went to work as a software developer.

Now, Pearce, a distinguished engineer for Cisco Systems Inc., serves on UNT's College of Engineering Advisory Board. The university innovates to prepare students for careers in science and technology, he says.

Pearce, who holds 39 software patents, calls UNT the springboard for his career. Through his involvement with the computer science department and The Campaign for UNT, he is encouraging his network of STEM professionals to support UNT.

"With my degrees, I was immediately marketable," Pearce says. "UNT gets students ready to enter the workforce."