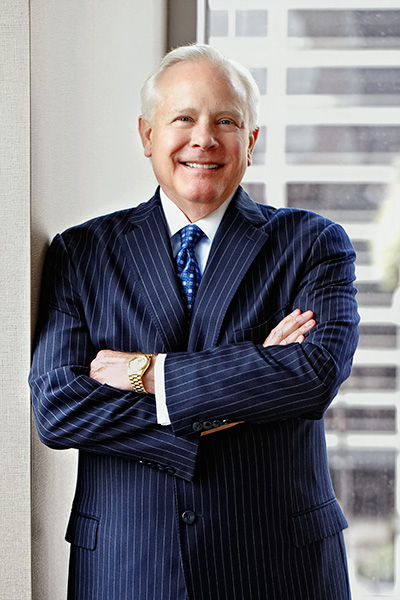 When George F. Jones Jr. ('67) transferred to the university in 1965, he was a young man looking for a fresh academic start. What he discovered was a career path that has made him one of the most influential men in the Texas banking industry.

"From the point I was admitted, UNT took the time to care about me. The faculty made an effort to get to know me," he says. "They understood my needs and found a way to foster talents I didn't know I had."

Jones says the personal attention he received from faculty and their high-quality instruction transformed him from a wayward young man into a hardworking college student who spent the hours he wasn't in class as a teller working at a bank just blocks from campus.

Today, he serves as president and CEO of Texas Capital Bank and its parent company, Texas Capital Bancshares Inc. By assets, Texas Capital is considered the second-largest bank headquartered in the Dallas-Fort Worth area. Jones and others founded the bank in 1998 with $80 million in private capital. At the time, it was the largest privately held bank in the U.S., raising $125 million before going public in 2003.

"I owe so much of my success to my time at UNT," Jones says. "The experience was such a stabilizing force in my life, giving me direction and helping me develop my interest in banking."

Born and raised in Dallas, Jones commuted to campus, attended classes during the day and worked at least 30 hours each week.

Now, with more than 40 years of banking experience, Jones is one of the most recognizable figures in Dallas finance. His professional credits include executive leadership in many of Dallas' key financial institutions, including Resource Bank Dallas and Comerica Bank-Texas, where he supervised a commercial loan portfolio of nearly $1 billion. Jones also was president and CEO of NorthPark National Bank and president of NorthPark National Corp.

But Jones is more than a dedicated professional. He also is focused on giving back. He actively serves on the Salesmanship Club of Dallas and was a past chair of the club's Foundation Board of Trustees. The organization is committed to working with troubled and at-risk children and their families to help them transform the children's futures.

"Community service is an essential part of being a good citizen," he says. "It's the right thing to do, and it's rewarding for so many reasons."

And Jones says he will be forever grateful for the education and the mentorship he received at UNT, which included help in landing his first job at a bank. He still remembers his economics professor challenging him to broaden his worldview and approach economics through the lens of real-life applications.

"It's hard to put into words the influence the university had on me as a young man," he says. "UNT was such a helpful and nurturing environment, but the professors also really challenged us to think critically about the world and our role in it."