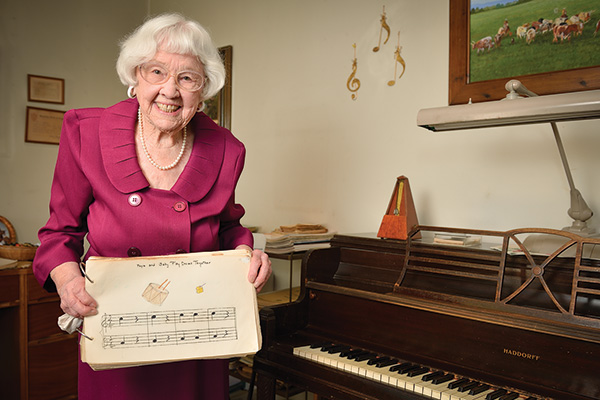 I was one of the only women in my music classes and received the first Bachelor of Music degree at North Texas. But of all the achievements in my life, the one I'm most proud of is teaching 3-year-olds.

I've taught students of all ages, but little children need to move around, and while you're teaching them music they can learn their ABCs and numbers. Years ago, when people asked me to teach their 3-year-olds, I couldn't find music books for that age.

So, I wrote my own book, The Littlest Beginner, which includes games so they can play while they learn. Clavier magazine wrote about it in 1993. I was 80 at the time and teaching 35 students, whose ages ranged from 3 to 80. When I was 96, after College of Music professors heard about my book, they invited me to lead a master class on teaching young children for the college's music education students.

My mother started teaching me music when I was 5 and music has been my whole life since. I think music is important to have in your life, especially for children, who are eager to learn and enjoy it so much.

Both my sister, Marinell, and I took piano and then violin lessons. Back then, school only had 11 grades. I graduated at 16 as valedictorian of Henrietta High School, and when my sister went to North Texas in 1930, I followed her.

I majored in piano and played in the orchestra. In my music theory classes, my teachers found out I already knew everything because I'd had such good theory teachers growing up. Professors had me grading my classmates' papers. All of the band boys I played with were in classes together and they treated me like a queen because I was grading their papers.

It was 1934 when I earned my degree. This was during the very heart of the Depression. I started teaching, but I also played music for a dancing school in Dallas for extra money.

Then, my sister called me and said a friend of ours who lived in Nocona had died. She wanted to know if I could come take her place and teach her piano students. That's how I ended up back in Henrietta, riding the bus back and forth to Nocona.

Most Saturdays, I had the same bus driver, H.A. Baker. He and his whole family could play instruments by ear.

He played the accordion, piano, guitar — you name it — and in the 1940s he was in a band with his brothers, the Harmony Boys.

Today, I still teach, but I don't have as many students as I used to or participate in as many musical activities. I still play for the Grand Avenue Baptist Church in Gainesville, but I recently had to stop playing for the Gainesville State School.

I played piano for their morning services every Sunday for 47 years.

I had so much fun at North Texas and I think it's important to always keep learning. I've always taught myself new things and enjoyed teaching others.

I won't be able to teach forever, but I'll hang on as long as I can.

Maudell Gentry Baker ('34) earned a Bachelor of Music degree with a concentration in music education, making her the first graduate to do so. She received UNT's College of Music Alumni Appreciation award in 2004. Baker will celebrate her 100th birthday in August.