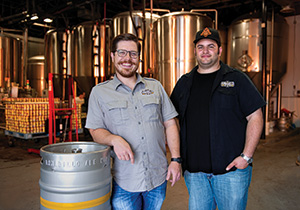 Greenbelt Farmhouse Ale and Quakertown Stout are vintage Denton, and so are the UNT alumni entrepreneurs who brew them.

Turning a college hobby into a career isn't always easy, especially if the hobby is brewing beer. But Bobby Mullins ('07) and Yianni Arestis ('08, '11 M.B.A.) got a boost when their business plan for Armadillo Ale Works earned $10,000 in the 2010 New Venture Creation Contest of UNT's Murphy Center for Entrepreneurship. Now recipes are invented and tested at Mullins' house, then brewed and distributed around the state by Dallas' Deep Ellum Brewing Co. Raising capital for a Denton brewery is next on the list.

Mullins began brewing beer and trying new recipes as a hobby after getting a kit as a gift from his brother. He says books and the Internet are great resources for learning about brewing, but much of it is trial and error.

"Over time, you figure out what works and what doesn't. There were a lot of mistakes and there still sometimes are," he says, "but, just like life, you learn from it and move on."

After graduation, Mullins decided he liked making beer so much he might want to do it for a living. So he emailed Texas breweries, offering to scrub floors or work in whatever jobs they had available.

Within two weeks, his radio/television/film degree caught the attention of Houston's Saint Arnold Brewing Co., which needed help with a video shoot. Mullins drove down to film for a day, discovered a position had opened on the brewery's kegging line, interviewed and, by the next week, had the job.

"It kind of fell into my lap, but the rest is history," he says.

Mullins quickly moved from cleaning and filling kegs to working as a brewer at Saint Arnold. After several years there, he got in touch with Arestis, his friend at UNT who had a degree in entrepreneurship and was then halfway through his M.B.A. As they talked over ideas for opening their own business, the plan for Armadillo Ale Works began to take shape.

Arestis, who calls being a student in the College of Business "conducive to getting your stuff together," says entering the New Venture Creation Contest was critical to their success. The annual contest awards start-up funds to student-proposed ventures.

"It got us on a timeframe to make a good business plan to present to professors, bankers and business people," he says. "They critiqued it and gave us feedback. And we won some money, which is great because we really needed every penny back then to get going."

They both say the camaraderie of those in the brewing industry has been another important part of their success. That helpful spirit led to their recipes being brewed and distributed throughout Dallas-Fort Worth, Houston and Austin by Deep Ellum Brewing Co.

"There aren't many industries where one company will help a local competitor get off the ground and get into the market," Arestis says. "That's just unheard of in other industries."

The arrangement has helped to get their name out as well as spread the spirit of Denton around the state. The two Armadillo Ale Works lines being distributed are named for Denton sites: Quakertown Stout, made with malts, oats and maple syrup, and Greenbelt Farmhouse Ale, a wheat spiced with coriander and grapefruit peel.

Mullins brews the recipes and does test batches at his house before they are scaled up at Deep Ellum. He says working at Saint Arnold helped him learn every aspect of commercial brewing, but recipes are perfected from "brewing them over and over again and tweaking things."

"It's challenging at times to estimate how ingredients are going to create a final product," he says. "With brewing, you make it and then you have to wait two to six weeks just to find out how it came out because of the fermentation process."

Although Arestis does not have as much brewing experience, he has the better palate, according to Mullins.

"Yianni's able to pick out the flavors and nuances in the beer. He can describe them to me and I know what ingredients they come from but I don't necessarily taste them all."

On a smaller scale, they've also experimented with making sodas. After brewing a honey lemonade for a family-friendly event, they discovered it was as much a hit with the adults as with the kids. Requiring only a commercial kitchen and the proper license, it's a less-regulated side line they have plans to add once they reach their end goal: their own brewery in Denton.

"There's just something about this town that we like. I've been all around the world and this is where I decided to plant my roots," Arestis says. "Even people who don't know the town that well have an image of it and think a brewery would fit in perfectly here."

While they raise capital and gather more investors, the two friends look back on how far they've come.

"One of the things we decided early on was that this is a learning process. I learned a lot from my professors who have businesses and from networking," Arestis says. "We knew it was going to take a while, but we were dedicated and thought, 'As long as it takes, we'll see it through.'"

Mullins says the reward has been in doing what they love to do.

"It's not easy, by any means, but that whole thing where your parents tell you that you can be anything when you grow up?" he says. "That is very true if you give it your all."

Mullins: I've always thought that each batch was its own little science experiment. It took me a while to get used to how long the brewing process takes. I want instant results.

On the brewing industry:

Mullins: It's such a fun industry to be a part of. You're making beer and beer makes people happy usually. Within the industry itself, people are super helpful and friendly. Those we consider some of our closest competitors are some of our resources for information.

Arestis: There's just a different mindset. It was really eye opening when we first started doing this and everyone was really cool. They were actually helpful and not out to get us.

About the name Armadillo Ale Works:

Mullins: I've always had a fondness for armadillos, which sounds weird every time I say it, but it's a good, strong Texas small mammal.

Arestis: We wanted something a little more unique because we feel like Denton is unique.

On meeting as students:

Arestis: We met 10 years ago on the way to a concert in Deep Ellum and then were friends through college. Local music was our thing back then and we're still into it, but local beer is a little more important to us now.