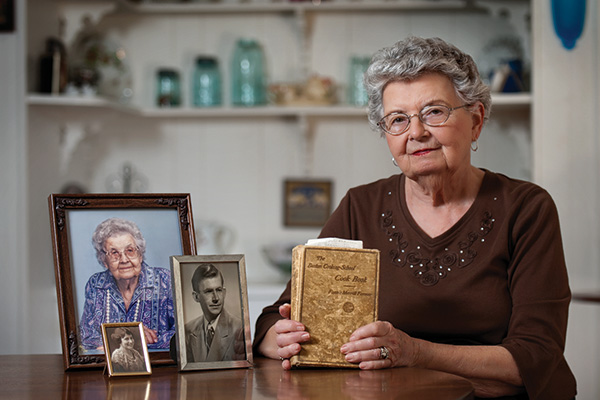 Recently, I cleaned out my kitchen drawer and came across a piece of my family's past — a Fannie Farmer cookbook that belonged to my Aunt Ester Thomas.

She and my mother, Ruth Thomas Davison, were students together at North Texas State Normal College nearly 100 years ago.

I opened the cookbook and saw that it was a textbook from North Texas, marked inside with Aunt Ester's name, the school year 1917-18 and the address of the boarding house on Sycamore Street where she and my mother lived as home economics students. They later went on to be teachers.

Through the years, my aunt wrote her favorite recipes around the pages, including some for bread and butter pickles, white fudge and "economy" pie. It still has page markers in place. I've had the book since 1987 when she died. I've never used it — I just kept it because I knew it was a treasure.

When I started at North Texas in the summer of '47 as a music education major, my mother and daddy took me to the bank that my Uncle George Odem, a professor at North Texas, recommended and deposited $3,000. I used the money to pay for my room, board and fees, including my textbooks, and graduated in three years.

We were frugal as students — all of us were. Only on Sunday evenings, when the dorms were closed, did we walk or ride the bus to town to eat dinner, typically near the Texas State College for Women.

But we had great times. I lived in Terrill Hall as a freshman and walked across the alley to eat in Marquis Hall. Later, I moved into Bruce Hall and joined Zeta Pi Gamma sorority. I also became a member of Sigma Alpha Iota — the music honors society of which I am still a proud member.

In the fall of '48, I met my husband, Henry Truett Torgerson ('48, '49 M.S.) — he was nicknamed "Torg." My mother sent me a birthday cake, and his roommate at the Hamilton House brought him to share it with me in the music library where I worked.

Torg was five years older than I was and had just returned from World War II. It was the most heavenly time at North Texas, with all these men returning and looking for degrees and for a wife.

Torg studied industrial arts and could draw and make anything. After we graduated and married, he taught shop and mechanical drawing in Marlin while I taught music and later language arts.

He was so gifted. He opened an antique business and fixed things for folks. We built a shop in the back yard and that's how we put our kids through school. We had a wonderful life.

My mother lived to be 101 and Aunt Ester lived into her 80s. If you look at that cookbook, it's obvious she loved it and used it. Finding it reminded me how much she and my mother loved North Texas.

To think, I never noticed the book's history all these years.

Ruth Ann Davison Torgerson ('50) is 83 and lives in Marlin, where she and her husband, who died in 2009, raised their family and were educators. She recently donated her aunt's book, The Boston Cooking-School Cook Book by Fannie Merritt Farmer, to UNT's Rare Book Room and has established scholarships in memory of her husband, mother and aunt.

Send us an email at northtexan@unt.edu to share your photos and memories.