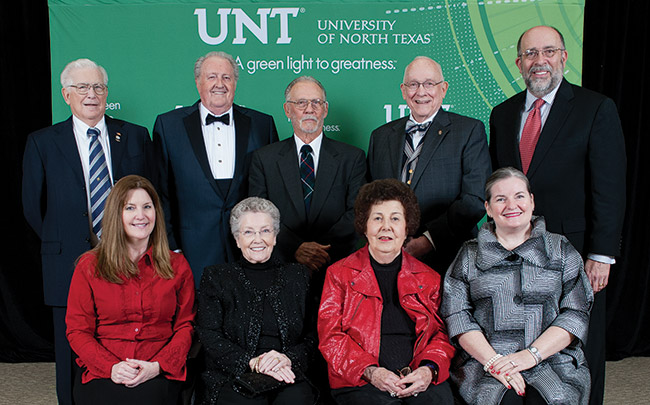 For C. Dean Davis ('53), former chair of the UNT Board of Regents, attending North Texas is a family affair.

Davis, founder and senior managing shareholder of the Austin law firm Davis Fuller Jackson and Keene, formerly Davis & Davis, is one of more than 30 family members to attend the university, going back to the family's first graduate in the early 1900s.

The Davis family was honored for a century of UNT pride with a Generations of Excellence Award at the annual Alumni Awards Dinner Feb. 22. The award, introduced in 2009, recognizes families with many members who have attended or graduated from the university, who have demonstrated the value of family in their individual and collective lives, and who have provided extraordinary service to and advocacy for UNT.

"North Texas has been an extremely special place for our family," Davis says. "The majority were and are teachers, and they got their start here."

The Davis family's history with the university started with Lynn Davis, who received his teaching certification from North Texas State Normal College in 1910 and worked as an assistant superintendent in the El Paso ISD. The link to UNT continues through the decades and generations, with alumni including Dean's cousin, O.L. Davis Jr. ('49, '50 M.Ed.), a Professor Emeritus of curriculum and instruction at the University of Texas at Austin; Dean's sister, Ellen Davis Taylor ('55), and her husband, James ('56, '59 M.S.) and their daughter Debbie Taylor Albrecht ('82); and O.L.'s grandson John Lynn­wood Davis Jr. ('98 M.S.).

O.L. Davis Jr. was a member of the Naval Reserves on campus and entered Officer Candidate School, a rigorous leadership and infantry training program, with other North Texas alumni.

"During active duty in the Korean War, we were in OCS class with people from Harvard and Yale, and we were able to hold our own," O.L. says. "UNT has always had strong undergraduate programs."

Watching UNT grow and improve through the years has instilled in Dean a desire to help the alma mater that has meant so much to his family.

Upon Dean's graduation, he attended law school at the University of Texas at Austin, accepting a position in the Texas Attorney General's Office before moving into private practice. He was appointed a UNT regent in 1967 and again in 1983. He was elected chair of both the UNT and UNT Health Science Center boards in 1987.

Recently, Dean and his wife, Mollie, announced an estate gift of $1 million to support several areas at UNT.

"We have an obligation to be sure that students have the same opportunity," Dean says, "for a life-changing experience that we did."