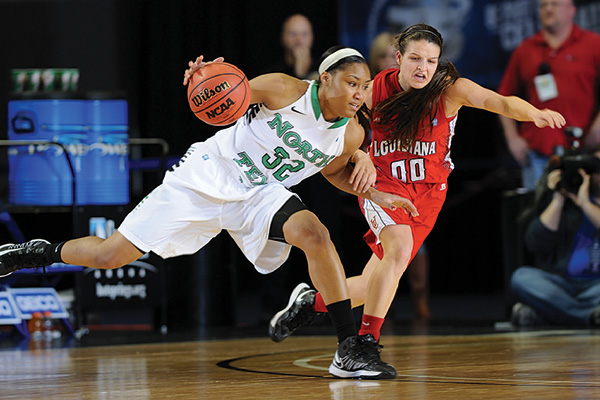 The Mean Green basketball teams will join Conference USA this summer after ending more than a decade of play in the Sun Belt Conference.

During its time in the league, the men's team won the conference tournament to advance to the NCAA basketball tournament in both 2007 and 2010 and also played in the conference finals in 2011 and 2012. In its first season under head coach Tony Benford this year, the team was led by Tony Mitchell, preseason All-American and two-time All-Sun Belt Conference forward. The men won four of their last six games going into the tournament, where they lost to Louisiana-Lafayette in the first round.

The women's team won 10 conference games this season, the most in a single season since 2001-02. In its first year under head coach Mike Petersen, the team was led by All-Sun Belt Conference freshman Alexis Hyder and Sun Belt Freshman of the Year Loryn Goodwin. At the Sun Belt tournament, the team went to double overtime before losing to Louisiana-Lafayette in the opening round.

With C-USA offering high-quality recruits, national exposure and name-brand competition, both teams look ahead to next season.

"C-USA provides that across-the-board competitiveness, that historical record of being great in our sport and a platform where you can come to North Texas and you can win games that are meaningful on a national level," Petersen says. "I think that's what all athletes want to do."