The annual UNT Alumni Awards always bring attention to the university's best known and most accomplished former students. But this year's honorees include alumni who are famous far beyond the North Texas region, with legions of fans worldwide — a current chart-topping country sensation and a rock 'n' roll legend whose iconic voice landed him at No. 13 on Rolling Stone's list of the 100 Greatest Singers of All Time.

The awards will be presented Feb. 22 at UNT's Gateway Center. 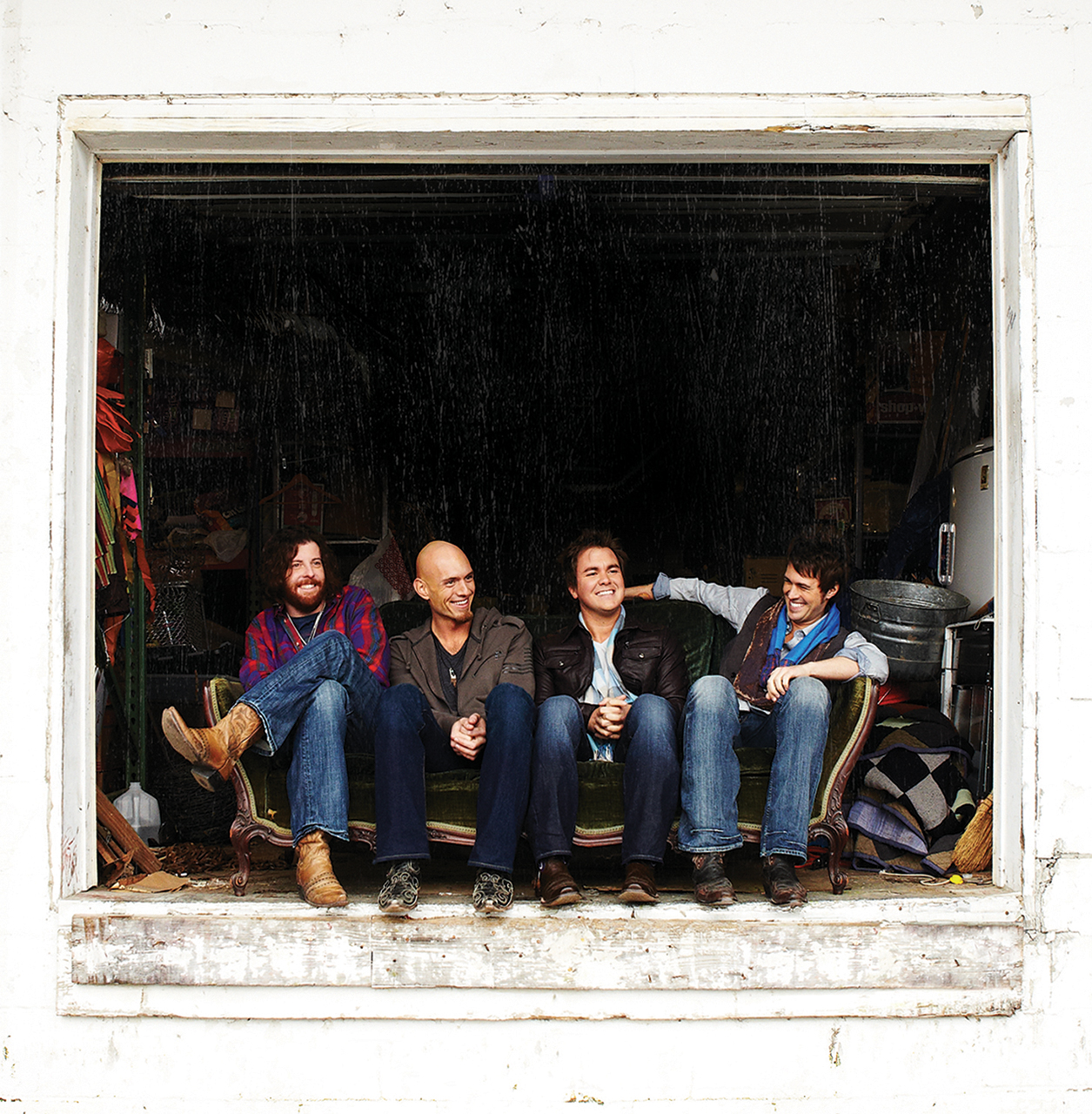 Eli Young Band has been together for more than 12 years after meeting as students at UNT. Michael Eli Diaz, James J. Young, Jonathan Bradley Jones and Christopher J. Thompson performed around Denton — including outside Kerr Hall for Freshman Orientation one summer — building their fan base with each live show.

The band's album Jet Black & Jealous, released in 2008, spawned the band's first Top 10 hit, "Always the Love Songs." Their next album, Life at Best, includes their first platinum-selling digital single and first No. 1 single, "Crazy Girl," which sold more than 1.5 million downloads. In 2012 the band was honored for Song of the Year at the Academy of Country Music Awards. The band was nominated for a Grammy Award for Best Country Song for "Even If It Breaks Your Heart" in 2013. Recently, the band returned to its Denton roots, filming a webisode at several locations on the UNT campus — including Apogee Stadium and the Library Mall fountains — for the title track from Life at Best.

"It's great to see the students, to talk with them and tell them we're glad to be back," Thompson says. "Because we went to school here too, graduated and are proud that it's part of our history."

Diaz echoed the fact that UNT helped the band build a foundation for its current success.

"This university has been a part of us for so many years, we built the band here and we built our lives that we have now — it all started at UNT," Diaz says.

Eli Young Band will not be able to accept the honor in person, because they are performing a concert in Chicago the night of the awards.

More about
the alumni

Chris Drake's success story starts with his transition from military veteran to engaged university student. Drake enrolled at UNT in 1997 after serving as a paratrooper with the U.S. Army's storied 82nd Airborne Division. As a student, he committed himself to academics and campus life, serving as an Eagle Ambassador and as captain of the state-championship-winning UNT rugby team before earning a bachelor's degree in business administration with a concentration in finance.

Drake is now a sought-after speaker and writer on issues surrounding cloud computing, web hosting and security. He's often quoted in major industry news publications such as VentureBeat, eWeek, Dark Reading and the Wall Street Journal and has spoken at leading cloud and security industry events. Drake also was recognized as one of the "40 Under 40" business leaders by the Dallas Business Journal.
"The university allowed me to be the dynamic person that I am," Drake says. "At UNT, I was surprised by how you are empowered to do what you want to do."

Famed singer and songwriter Roy Orbison was a student at North Texas for just a short time, but that time played a critical role in his musical career, says David Lipscomb ('58), a friend of Orbison's from childhood up until Orbison's death in 1988.

"North Texas had a reputation in the music industry of getting people the key to a music career," Lipscomb says.

With his band the Teen Kings, Orbison recorded "Ooby Dooby" at a Dallas studio. The song was written by fellow North Texas students Wade Lee Moore and Dick Penner (ʼ58). Although "Ooby Dooby" made the band minor celebrities in West Texas, where they played local clubs and on TV, it was not until Sun Records producer Sam Phillips, who launched Elvis Presley's career, heard the single that Orbison got his lucky break.

Orbison and the Teen Kings arrived in Memphis in 1956. They re-recorded "Ooby Dooby" and were signed to a national tour, opening for Carl Perkins, Johnny Cash, Jerry Lee Lewis and other country and rockabilly stars.

"Ooby Dooby" peaked at No. 59 on the national charts in June 1956, but the Teen Kings broke up that same year. Orbison used studio musicians for future Sun sessions, staying with the label until 1958.

Orbison was inducted into the Rock and Roll Hall of Fame and the Nashville Songwriters Hall of Fame in 1987. The next year, he released The Traveling Wilburys, Volume One with fellow rock legends Bob Dylan, George Harrison, Tom Petty and Jeff Lynne; the album won a Grammy Award. Rolling Stone placed Orbison at No. 37 on its list of the Greatest Artists of All Time and No. 13 on its list of the 100 Greatest Singers of All Time. Orbison died in December 1988.

"North Texas always held a special place in our father, Roy Orbison's, heart," Orbison's sons, Alex and Roy Orbison Jr., said in a statement. "His time at UNT helped develop such a truly unique talent, and it was one of the cornerstones preceding a remarkable music career."

Samuel P. Golden has built a successful career in the financial services industry. As a student at North Texas, he played Mean Green football and was a charter member of Kappa Alpha Psi social fraternity. Golden, who earned a bachelor's degree in business administration, currently serves as co-CEO of Alvarez & Marsal Financial Industry Advisory Services in Houston. Prior to joining Alvarez & Marsal, Golden served in a variety of leadership roles with the U.S. Office of the Comptroller of the Currency, which charters and regulates all national banks and federal savings associations.

He also is chairman of the Finance Council at Gethesmane Missionary Baptist Church and has served in a variety of leadership roles with the Fort Bend Education Foundation, both in the Houston area. Golden's daughters Janna (ʼ11) and Jaclyn (ʼ06), also UNT alumni, played on the UNT women's golf team.

"This award is not about me. This is a very special honor for those upon whose shoulders I stand," he says. "We know that in our family this legacy of giving, of making a difference, of loving UNT will go on."

Friedman also has volunteered for the Juvenile Diabetes Association of Dallas, the Jewish Federation of Dallas and the Bicentennial Lions Club. He serves both his alma maters — UNT, where he earned a bachelor's degree in psychology, and Harvard University, where he earned a master's degree in design studies. Friedman is on the board of the UNT Alumni Association, the Harvard Real Estate Initiative and the advisory board for the UNT Jewish Studies program.

An Eagle Scout and two-time president of his fraternity, Sigma Alpha Mu, Friedman also has an impressive list of professional accomplishments in commercial real estate. In 2006, he was awarded the prestigious Stemmons Service Award, presented by the North Texas Commercial Association of Realtors and Real Estate Professionals.

"UNT gave me a chance — an open door to reach for the stars," Friedman says. "From that point I promised myself that I would give back, and that's where it all started — giving back to the university and to the community, because UNT gave me a chance."

Presented to an individual or group that has made noteworthy efforts to sustain spirit among the UNT family.

UNT Regent Ernie Kuehne Jr., a native of Mart, Texas, came to the university in 1962 on a track scholarship. After earning his bachelor's degree in political science in 1966, he earned a law degree from Baylor University in 1969.

In August 2012, Kuehne chaired UNT's Basketball Enhancement Committee, which raised more than $3 million in gifts for a new basketball training facility, a state-of-the-art scoreboard in the UNT Coliseum and additional funding for scholarships. As part of that campaign, Kuehne presented the athletic department with a cornerstone $1 million gift.

Kuehne, president and board chairman of Kuehne Oil Co., is also

He is a 32nd Degree Scottish Rite Mason and a volunteer for the Texas Scottish Rite Hospital for Children and Greater Dallas Juvenile Diabetes Foundation.

"I have often said that my family is my foundation, and North Texas was the cornerstone that sent me well on my way to a successful life," Kuehne says.

Presented to a family for extraordinary service to and advocacy for UNT through multiple generations.

The family of former UNT Board of Regents Chairman C. Dean Davis ('53) has a rich history with the university that includes nearly 40 alumni going back to 1910.

Davis' parents, aunt, uncles, cousins, sister and many extended family members attended North Texas, as did he. He was a national debate champion and student government representative before earning an honors degree in government and economics. Upon graduation he attended law school at the University of Texas at Austin, accepting a position in the Texas Attorney General's Office before moving into private practice, focusing on health care legislation and litigation.

"I am very pleased to accept this very thoughtful acknowledgment. It will have a very special place in my heart because it is the recognition of my family and my extended family, and what this university has meant to that very large group of people," Davis says. "Without the start we received here on this campus, we would have been denied a lifetime of memories."