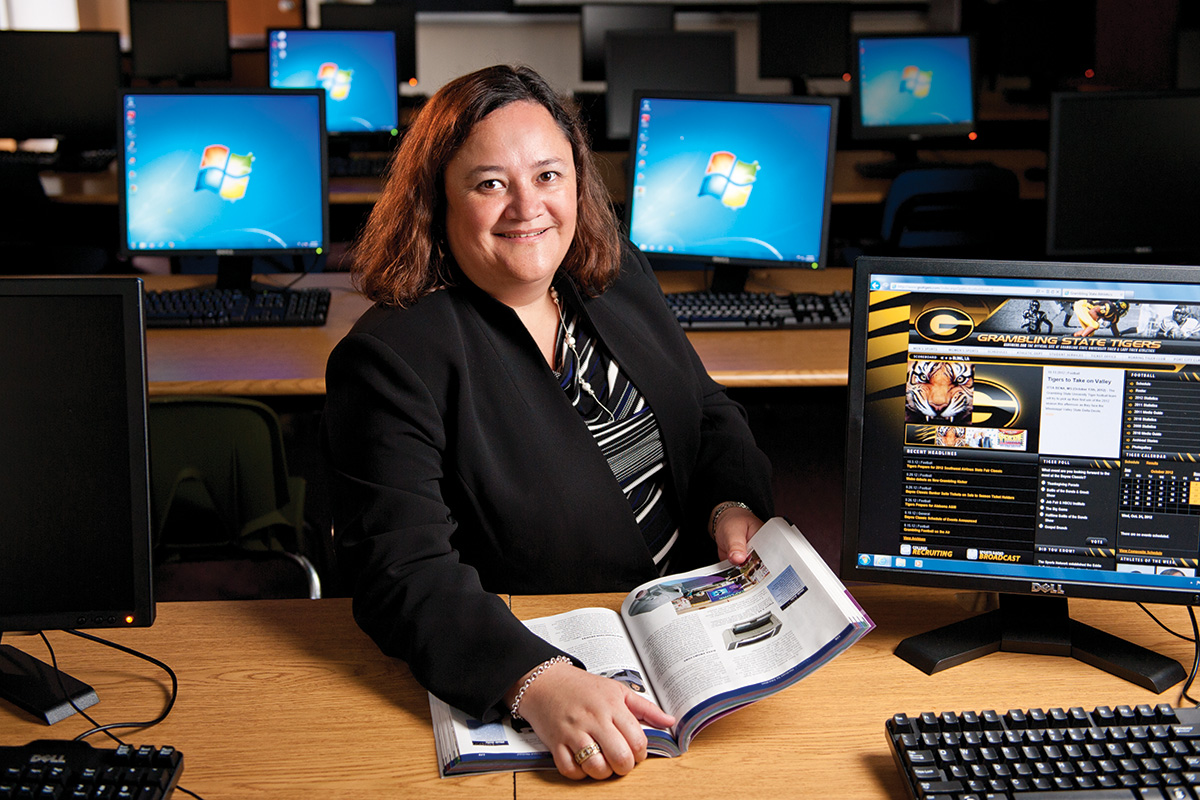 After several inspiring visits to art museums in Europe during her master's studies at Glasgow University, Adriana D'Alba ('12 Ph.D.) wanted to find a way to use the Internet so those without resources to travel could have similar experiences. In fact, she chose UNT to study because Greg Jones, an associate professor of learning technologies who would become her major professor and advisor, had like interests.

"I was looking for a place to begin my Ph.D.," she says. "I read about this guy at UNT who was researching 3-D virtual museum environments, the research that I wanted to do."

A native of Mexico, D'Alba studied and taught graphic design at the Universidad Autónoma del Estado de México in Toluca before her master's studies. After D'Alba began her doctorate at UNT, Jones helped her write a grant proposal for the UAEM-UNT Research Seed Funding Program.

The fund, established in 2010, provides for joint research projects that strengthen the close relationship between the two institutions and give students opportunities for international immersion with different languages and culture.

More about the growing partnership

Read about the 10 year international partnership

The Research Seed Funding Program is the most recent of several connections benefiting students that UNT and UAEM have forged through their 10-year partnership. Other mutually beneficial efforts include a scholarship program for UAEM graduates who enter doctoral degree programs at UNT, a summer institute hosted by UNT's Department of Linguistics and Technical Communication that provides UAEM students and faculty with intense English language instruction, academic liaison offices at the UAEM and UNT campuses, and exchange programs for students between the sister universities.

"As we celebrate the first decade of our formal collaboration, the common themes of reciprocity, respect and quality of our endeavor have been retained and strengthened," UNT Provost Warren Burggren says. "This successful international cooperation has enriched both universities."

The seed funding grant allowed D'Alba to test a 3-D virtual environment that she designed, using software created by Jones, for an exhibit of murals by contemporary Mexican artist and sculptor Leopoldo Flores that is on permanent display at UAEM.

"I've been able to apply my love of art to teaching," says D'Alba, who earned her doctoral degree in May and recently became an assistant professor of education at Grambling University, where she continues to collaborate with Jones on researching learning environments.

"I'm incredibly lucky," she says. "I could not have done this research or gone this far without UNT and UAEM."

Oscar Olea-Mejia ('07 Ph.D.) attended a lecture as an undergraduate at UAEM in 2003 delivered by Witold Brostow, UNT Regents Professor of materials science and engineering. Brostow was the first UNT faculty member to establish a connection to UAEM through research collaborations before the formal agreement was signed between the two universities in 2002.

"Dr. Brostow told me about UNT's engineering programs and the joint programs forming with UAEM," says Olea, who now teaches at UAEM's College of Chemistry.  "I came to UNT, and as my doctoral advisor, he inspired me to be a materials scientist."

While at UNT, Olea published research papers in prestigious journals such as Materials Letters. He also presented papers at conferences in Japan, Poland and Mexico. Brostow adds that Olea and other UAEM faculty have contributed to editing the Journal of Materials Education published by the International Council on Materials Education, headquartered at UNT.

"The partnerships benefit students and faculty going both ways," Brostow says. "With our global economy, it's important for students to have exposure to different cultures, habits and customs."

Olea has fond memories of his time at UNT, living in the residence halls and participating on the UNT tennis club team, which fostered many friendships and helped him master English.

"My fluency in English was very important to me as it's considered the universal language for the global scientific community," he says.

At UAEM, Olea now teaches and researches materials science at the nano-level, using green chemistry techniques, in the university's Sustainable Chemistry Research Center. During his time at UNT, he gained experience working on electron microscopes similar to those he now uses in his center.

"I wanted to be a researcher, but I became a teacher too. I learned that one goes with the other," he says, adding that some of his students have since come to UNT through joint research projects with Brostow.

"The partnerships and achievements of the students at both universities are a win-win situation," Olea says. "Productivity increases when more people are involved with a project and different perspectives, experiences and equipment complement each other.

"I feel very proud of my two universities — UAEM and UNT."

As a McNair Scholar and political science undergraduate focused on human rights, Rosa Fonseca ('08) wanted a better understanding of Mexico, the country in which she was born.

"I had been in the states since I was a little girl," she says. "And even though I visited Mexico with my family every year, I wanted to understand the country on a different level."

During Fonseca's senior year, after receiving guidance from the UAEM liaison office at UNT, she packed her bags and headed to Toluca as the first student to go to UAEM in a UNT exchange program. She took classes in human rights, Mexican constitutional law and conflict mediation — classes she says opened her eyes to different perspectives and forced her out of her comfort zone.

"Using the Socratic method, my constitutional law professor challenged me to really think about whether the statements I was making about the Mexican constitution, which I had to make in Spanish, were correct," she says.

Now as an advisor for UNT's McNair Scholars Program, Fonseca is continuing her master's studies in political science. She wants to research how to settle territorial conflicts, partly inspired by her UAEM roommate's studies as a geographer.

"My studies in Mexico exposed me to other ideas and people," she says. "Before, I was studying international relations without an in-depth understanding of another country. It's much different when you live there 24/7." 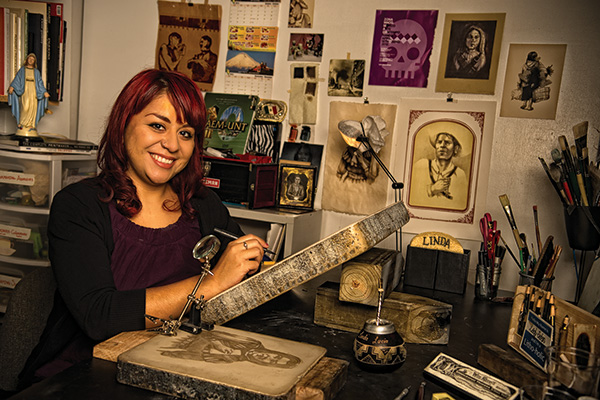 Like Fonseca, Linda Lucía Santana, a UNT M.F.A. student in printmaking, took part in the exchange program. She learned of the universities' partnership last summer when she attended an art exhibition of UAEM lithography students at UNT's Cora Stafford Gallery.

"My specialty is lithography, so right away I was interested," she says. "Mexican and Mexican-American folklore and song are the inspiration for my artwork. I'm second-generation Mexican American, but I had never been to Mexico."

During her UAEM studies, Santana created a series of drawings and prints of the street vendors she encountered in Toluca, Campeche, Merida and Mexico City. This fall, she hosted a showing of her work at the North Gallery in UNT's Art Building. She says she made instant connections with the lithography professor at UAEM and other art students.

"A lot of my work deals with a sense of belonging," she says. "In Mexico, I connected with the other artists there. We had camaraderie — we were all printmakers."

Santana says her UAEM experience was an unforgettable journey.

"In conducting research in Mexico, I discovered more about my culture, my artistic purpose and myself," she says. "It was life changing."