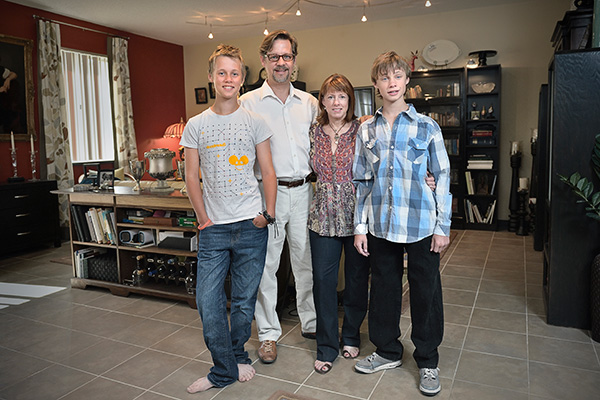 When UNT students move into residence halls, they may be miles away from Mom, Dad, siblings and the family dog. But they don't have to go far to be reminded of home.

Eric Ligon ('97 M.F.A.), associate dean and Distinguished University Professor in the College of Visual Arts and Design, and his wife and two teenage sons sold their four-bedroom Denton home this summer and moved into a two-bedroom apartment in Honors Hall — home of 200 of the more than 1,600 students in UNT's Honors College for academically talented students. With specially designed classes, the Honors College offers a challenging and supportive environment for students looking for opportunities to learn inside and outside of the classroom and build an academic and intellectual foundation that is second to none.

As the faculty member in residence in Honors Hall for the next two years, Eric Ligon invites students and other faculty members to gather around his table for family dinners, watch the presidential debates on TV in the lobby and generally build a bridge between faculty members and students.

"This is my favorite part of the job — the students," Ligon says. "Part of the goal is that students learn to see faculty as not just professors but people who engage in family activities and ongoing conversations. We'll invite other faculty members and have dinners and talk about disciplines. I hope students learn to be less intimidated by professors because they'll learn they're just people like their parents."

More on the
freshman experience

Learn more about UNT's programs for navigating the freshman year.

Eric Ligon's wife, Leslie, says she hopes students feel more at home, knowing a family of four with a dog named Hunter lives in the same hall. Nervous parents may feel calmer, too, she says.

"A lot of them are sending their first kid to college and they're scared and wondering if dorm life is going to be crazy," Leslie Ligon says. "I can assure them it's more studious. It's quieter than they might imagine."

The Honors College provides financial support, so the live-in faculty scholars incur no out-of-pocket expenses for events arranged for students. Faculty scholars are given meal tickets to invite students to lunch to continue academic discussions outside of the classroom and are encouraged to invite other faculty members to Honors Hall to talk with students.

Eric Ligon is the fifth live-in faculty scholar at Honors Hall since the hall's opening in 2007 — but the first Honors Hall faculty scholar to move in with a family, says Gloria Cox, dean of the UNT Honors College. Ligon will be a positive influence and source of support for students in the hall, she says.

"One of the main ways you connect students to campus is to know a professor. That is the most powerful thing we have going to keep students engaged," Cox says. "In the case of Eric Ligon, you have someone who has a lot of experience in his own college. He's easy to get along with and easy to talk to. He brings his academic expertise and approachability. And he brings two kids and a pet, and of course, his wonderful wife, Leslie.

"Having a family with young children and a dog seems to me something that Honors students will relish," Cox says. "The Ligons will do a fabulous job of being, not just a live-in scholar, but a live-in scholarly family."

"It is tremendously popular," she says. "Of course, it should be. It has music practice rooms, game systems, a baby grand piano in the lobby and well-furnished study lounges. It's a wonderful place to live."

Both of Eric and Leslie's sons plan to attend UNT after graduating, so the experience of living in a residence hall will prepare them well for college life, they say.

Fifteen-year-old Ethan, a sophomore at Ryan High School, is looking forward to meeting other students and walking to events on campus in the University Union, Murchison Performing Arts Center and more.

"This is my backyard," Ethan says of campus. "There's way more stuff to do here than in the old neighborhood. The cool thing is my dad can walk to work now."

Nick, a 14-year-old freshman at Ryan, wants to study music and pursue a singing career — and he's looking forward to being within close distance of campus events.

"I do think that would be pretty cool," Nick says.

The Ligons acknowledge it was a big change to sell their 2,800-square-foot home in Denton and move into a 1,200-square-foot apartment in a residence hall. They sold much of their furniture and moved the rest of it into the Honors Hall apartment.

"A lot of people do this double take and say, 'You did what? You moved your family and you're selling your house?'" Eric Ligon says with a laugh.

But all four of them are happy to be on campus where they can help students feel more at home. Behind Honors Hall, Leslie Ligon has cleared Bermuda grass from a small mound of dirt to create a garden and a sitting spot for students. Just outside the door to their apartment, Eric and Leslie Ligon display their framed engagement photos on a hall table. In a hall outside their apartment, they set up a piano, where students can sit down and play and sing for a while.

During Mean Green Move-In Day, the family met parents and new students. They've hosted parties for students to watch and discuss the Republican and Democratic conventions. And Eric Ligon — billed as the "top chef" in the family — held a cooking lesson in the lobby of Honors Hall to teach 50 people how to make coq au vin.

"Leslie and I are also planning to adopt all of the kids whose parents aren't able to come to campus for Family Weekend," Eric Ligon says. "I think we'll host a tailgate party and go to the game. We'll be the biggest family there!"

Eric and Leslie Ligon — both former UNT students — love the idea of "urban living," they say.

"If I'm cooking and need a lemon, I can walk to Sac 'n' Save. It feels like that urban community environment," says Eric Ligon, who earned a master of fine arts degree from UNT.

As new students at UNT adjust to life in the residence halls, the Ligon family will be alongside them in Honors Hall, settling into residence hall life, too.