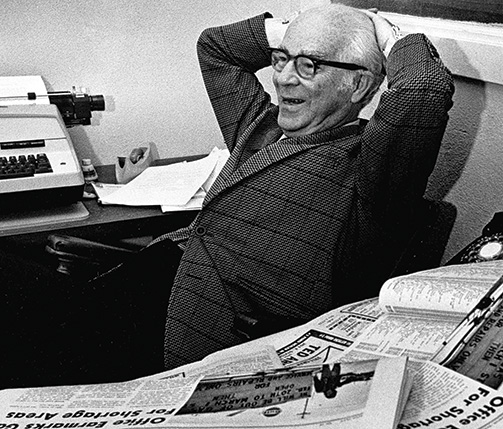 I recognized the name Roy Busby (but not the face, after 50 years) in the fall issue. What memories his reminiscences brought back!

I was part of the Pop Shuford era, graduating not long after Roy joined the university News Service. So while I didn't know Roy well, I knew who he was when he made his rounds of the Journalism Building checking on what scoops the staff of the Campus Chat might be working on.

Mr. Shuford (pictured right) did indeed demand excellence, and his standards prepared me well for a career in journalism that spanned 45 years. My fellow Chat staffers and I pulled many an all-nighter fine-tuning layouts, copy editing and headlines for the next edition lest we encounter Mr. Shuford's barbs in his critiques of the paper the next morning in class.

But those were exactly the kinds of experiences that prepared me for the real-world deadline challenges I would soon face in covering major news stories: the assassination of President Kennedy, the Detroit riots, the moon landing, the 9/11 attacks and countless more.

Roy outlasted me in his career by five years, but I haven't quit, either. The curiosity about the world that Pop Shuford nurtured in all of his students transferred to the think-tank arena.

Though the campus has drastically changed, the memories remain. Thanks, Roy, for helping freshen them.

I was a contemporary of Dean Busby's when we both attended North Texas in the late 1950s. Dean Shuford was my idea of the perfect journalist. He was lyrical, ethical, truthful, and also, a thorough "grader."

The first class I took with him was a creative writing course. For some odd reason, he thought I had some potential as a poet. (At the time, he was poet laureate of Texas).

I promptly informed him that there was no money in poetry. He was not pleased! The next semester I got a "C" in his page makeup class. It was the only "C" in my entire college transcript.

There was a bumper crop who graduated from North Texas in that late '50s timeframe. Two of them, Dub Brown and Bill Sloan, should be included in your outstanding alumni list.