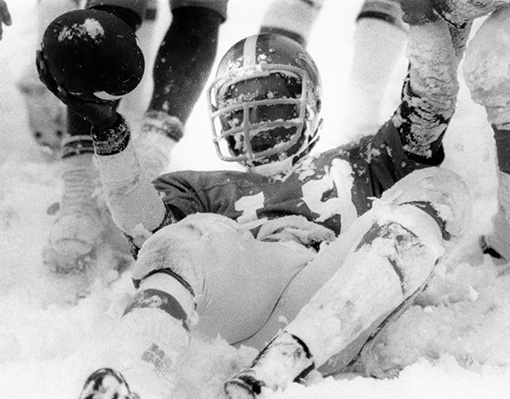 I'm not sure who or how many would call this a wonderful memory but it was very memorable. It was the fall of 1976 and my last year in the New York City area before relocating to the DFW area.

I flew back specifically to attend Homecoming that fall in part because we were playing Florida State University and additionally to shop for a home and sign a contract to purchase.

Here is what made it so memorable. It began to snow and snow and snow so that by the end of the game (which we lost) there was easily 10 to 12 inches of snow on the field. About six of us huddled together against the wall of the Fouts Field press box until the frigid end and few others were anywhere in the stadium.

I'm still amazed that this freaky snow storm came on a game in which we were playing FSU, a team made of mostly young men who were least likely to have lived in, played in and won in a snow storm.

Moving back to Texas resulted in my becoming very involved in university alumni affairs. I served at least two terms each as president of the Alumni Association and the Mean Green Club, which was in its infancy at that time, and I twice won the award for raising the most athletic scholarship money.

The Homecoming football game in 1963 will always stand out as my favorite. I had just graduated the previous year and was teaching at Lake Dallas. I was still living at the old Geezle House in order to stay close to campus. My fiancee, now wife, Susan Kennedy, was a senior and member of Delta Gamma.

The 1963 team did not have many victories, and Homecoming looked bleak. The game against the University of Wichita Shockers would end up shocking everyone. Late in the fourth quarter, Bobby Smith made a fantastic 52-yard run that placed the Eagles deep in enemy territory. A.D Whitfield would score on a pass from Billy Ryan and the Eagles were up 7-3 with less than two minutes left. The Shockers came with everything they had, and the oft maligned North Texas defense intercepted a pass to seal the victory. Everyone went crazy.

As was the custom in those days, all the frats and sororities held their Homecoming dance/party in Dallas or Fort Worth. The Geezles held theirs in the Adolphus Hotel. Several others did as well. About midway through the evening, several very distinguished looking ladies came down the hallway to see what was producing the loud music.

These ladies, mostly senior citizens, stopped and asked the policeman on duty what was happening.

The officer said that Fraternity "A" was in that ballroom, Fraternity "B" was in the other, then he pointed at the Geezle gathering and said, "I don't know what the heck is going on in there, but I wish I was off duty and could join them."

The ladies came in and stayed for about 30 minutes. One hired the band that was playing to come to a function she was hosting for her grandchild.

I still judge all parties by the Homecoming celebration of 1963. 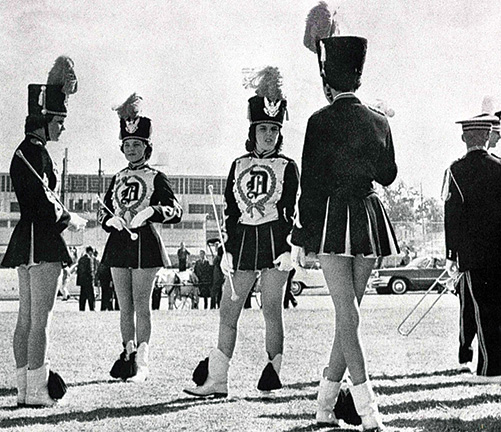 I graduated in 1968 from Holliday High School in Holliday, Texas. While in the marching band at Holliday, we traveled to march in the UNT Homecoming Parade as did bands from all over. It was quite an event for us, being such a small school. We loved every minute of the experience. I even missed attending my brother's wedding rehearsal because I thought I just couldn't miss the UNT Homecoming Parade!

Budget cuts have made participation in such events a thing of the past. I did not attend UNT, but my son-in-law, Shane Goforth ('96) is a music graduate and a band director in Houston. I still get my "band fix" watching his band.