Members of the Class of 1962 — the first students to earn degrees from North Texas as a university — gathered during Homecoming weekend for the annual Golden Eagles luncheon. Here are a few of their campus memories. 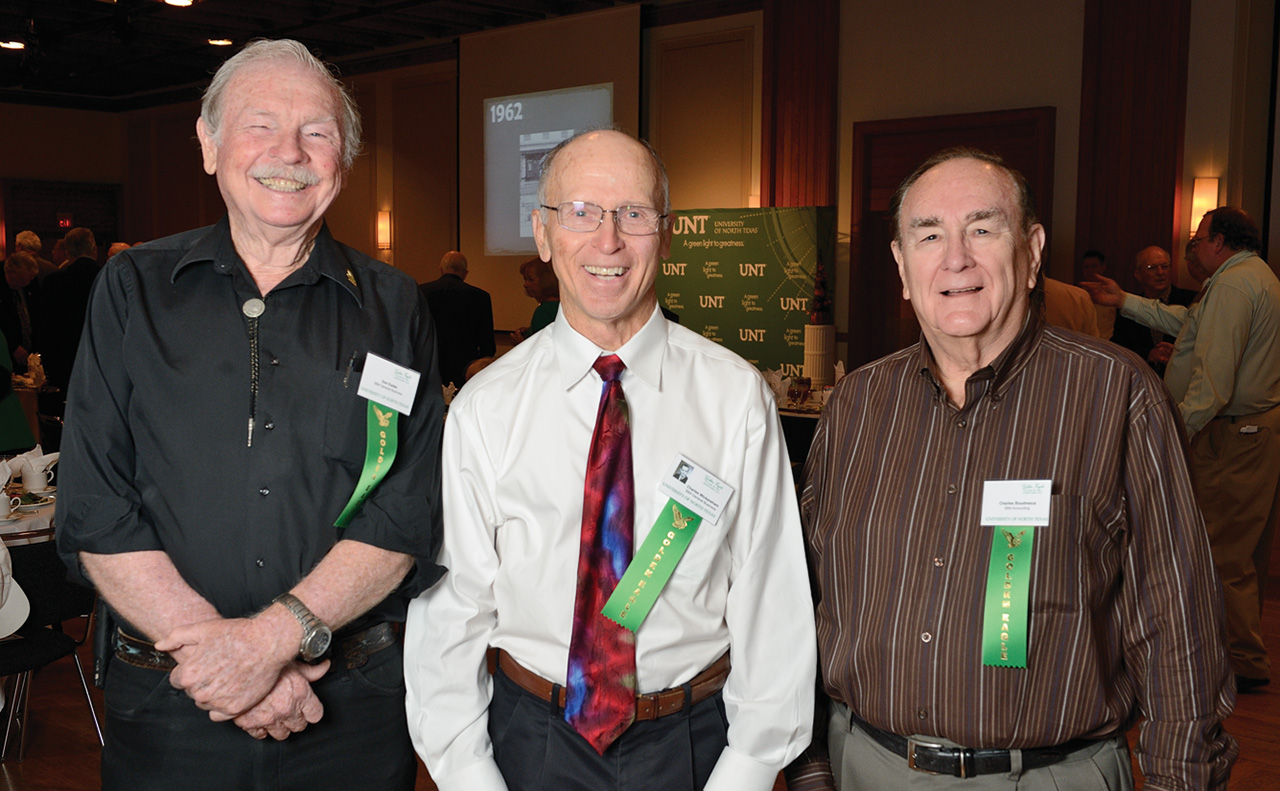 In 1960, I transferred from Kilgore College to North Texas State College. My Dutch wife, Wilhelmina, and our two baby girls moved to a rent house on Bernard Street. To make ends meet on the GI Bill I had to arrange all my classes (16 hours per semester) on Tuesdays and Thursdays to allow me to work at the Piggly Wiggly 40 to 60 hours a week on Mondays, Wednesdays, Fridays and Saturdays. That left Sunday for study. Our third baby girl arrived in 1961. It was a struggle, but it was certainly worth it to graduate in the first class from North Texas State University in January 1962.
— Charles Boudreaux ('62), Dallas

I had Dr. Shockley for an English course in the old building across from Voertman's. The windows were tall and usually closed, but Dr. Shockley needed fresh air. Each day he said in his southern accent "up, up, up," meaning raise the windows, no matter what the weather conditions. One day, two male students climbed up on the sills, locked the windows, and sat down. A girl got up to raise them. Dr. Shockley pounced on the two young men who were grinning. He informed them that allowing the lady to try to open the windows was not a gentlemanly thing to do. He banned them from the class that day and strongly suggested they drop the class — which they did. I'll never forget that day.
— Sandra Roers Burrow ('62), Gainesville

Alumni from the class of 1962 share memories from their time at what was then North Texas State College.

The most memorable experience for me was the pinning ceremony when I gave my wife, then girlfriend, Edrie Ruth Fry ('63), my fraternity pin. About five months later we were married. Fifty-one years later, she is still my girlfriend.
— Donald G. Chiles, D.D.S. ('62), Salado

The Theta Chi-Sigma Nu rope pull at the golf course pond between both fraternities each semester was a major affair. We practiced for weeks at the football practice field. North Texas was in the Missouri Valley Conference and played their games at the old Pit. I particularly remember basketball great Oscar Robertson coming to our stadium.
— Jerry Comegys ('62), Austin

The most memorable experience of my days at North Texas is meeting my wife in 1960. I was attending North Texas on the GI Bill. One of my friends was Raymond Crabtree (ʼ62). I was a member of the Beta Eta Chapter of Phi Kappa Sigma and Ray was a pledge at Beta Eta. Many times we would wrap up the evening having coffee at Holiday Lanes on Highway 24, now Highway 380 and University Drive. One night, a young girl, Mitzi Kerr who was a high school junior in Decatur, showed up at our table and asked us to bowl with her and her friend, Evelyn Tomlinson (ʼ64) who was a student at North Texas. Mitzi would become my wife before another year passed. Evelyn married my friend, Ray.
— F. Donald Eades (ʼ62), Lake Dallas

A campus rule was that girls could wear slacks only when the temperature dropped to freezing (yes, girls, that really was a rule). With rolled-up pants legs hidden under my long raincoat I went into the Union Building when whom should I meet but Dean Bentley, the dean of women. She had a reputation for strictness that struck fear into most of us. My rolled-up pants legs were beginning to unroll as we were chatting and I was panicked that she would notice. I realized later that she was a delightful and fair-minded woman who probably had a good chuckle from my attempts.
— Barbara Bristow Hawes ('62), Little Rock, Ark.

Learning "the Push" at North Texas increased my social activities during and after my college years. Great fun and fellowship was a result of my days in Denton. I really enjoyed working as an orderly at Denton State School, having fun at Fouts Field, being in Dr. Rooney's class, and dancing at the UB!
— Charles H. "Choo-Choo" Wickersham ('62), Duncanville