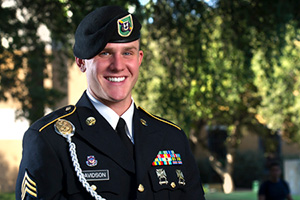 U.S. Army Sgt. Steven Davidson, a freshman transfer student, says he chose UNT because of the support the university offers veterans, the loyal friends he met on the UNT rugby team and the volunteer opportunities open to students interested in helping others.

After graduating from Northwest High School in Justin in 2009, Davidson attended North Central Texas College for a semester. But because of the cost of college, he decided to join the Army.

Then, in June 2011, he deployed with the 490th Civil Affairs Battalion to Djibouti, in the Horn of Africa, where his high school experience as an athletic trainer served him well. Those skills together with his quick instincts saved a fellow soldier's life during a French Desert Warfare course — an action that helped earn him the title of 2012 Army Times Soldier of the Year.

The Military Times Service Members of the Year recognizes individuals who are nominated by peers and commanders for their outstanding work on the job and in their communities demonstrating pride, dedication and courage beyond what is normally expected.

"I'm an admin soldier, so it's rather unusual that I won this award," he says, humbly adding that a former high school classmate nominated him for the honor. He witnessed the difference Davidson made as a mentor to young children before joining the Army and followed his heroic story in Djibouti.

"I was so surprised and honored," Davidson says.

As a human resources sergeant, Davidson was responsible for administrative tasks that included organizing awards and ceremonies to help keep up the morale of soldiers and their units. But three months into his deployment, spaces for 20 Americans opened up in the French Desert warfare course.

"It was a great opportunity," he says. "We all were pumping our chests and couldn't wait to go."

The French have maintained a military presence in Djibouti for several decades, and for the past several years, Americans deployed to Combined Joint Task Force Horn of Africa have participated in the French-organized training.

"Because of the harsh terrain, the area is used as a training ground for soldiers going to Afghanistan so they can learn to live off the land and survive in the desert," Davidson says.

The training is broken down into two phases. During the first five days, soldiers take classes ranging from the slaughter and field preparation of a goat and field cooking to land navigation and water collection. The second phase moves into the tactical portion, where students apply the lessons they learned in the first half of training.

"Even though it was September, it would reach temperatures of 120 degrees," he says. "We learned to dig holes in the desert, start a fire with nothing and filter urine and non-potable water to drink, sleeping only from 11 a.m. to 2 p.m. so we could travel five to six kilometers at night to get water that we stored for the next day."

The daytime navigation course, a timed event, required students to race against the clock — and each other. Without medics during the 10-day course, Davidson used his athletic training skills to help others.

"I was treating people for blisters and sun exposure throughout the course," he says adding that the last night was the worst after having walked into the mountains for nine hours. "We were so exhausted. I had lost 16 pounds by the last day. I kept hearing shout outs, saying 'One more kilometer left.' … 'You're almost there.' … But then someone yelled that one of the guys ahead had collapsed."

Davidson says he ran up to the American soldier and elevated his feet which seemed futile given his clothes were still on.

"I could feel the heat radiating from his body," he says." I pulled out scissors and cut off his pants, boots and shirt and then had those around me cut them into strips."

He soaked them with his remaining half canteen of water and placed them on the soldier to cool his body down.

"He was seizing and soon his muscles tightened and his body shrimped up and I thought he was dead," he says. "But when I put an airway tube to his nose and he fought back, shoving it away, I knew he was alive."

Davidson stayed with the soldier for two hours helping the French medics who arrived on the scene to hook him up to an IV until a medevac helicopter arrived. The soldier survived.

In addition to his life-saving efforts, Davidson also affected many high school students as a peer-assisted leadership mentor before he enlisted. Since his return stateside, he has been invited to speak at high school classes about anti-bullying, a cause he is passionate about as he was teased himself because he was a high school trainer.

"I tell kids that the skills I learned as a school athletic trainer are what gave me the confidence and ability to render aide on the mountain that day," he says.

And he has great plans to continue his service as a UNT student. As a member of the UNT rugby team, he's championing the team's efforts to give back to the local community by organizing community service visits to local hospitals. In addition, he's rallying support for his team by asking UNT sororities to make spirit signs, and has talked to them about his experiences and the importance of giving back.

"Mentoring is my biggest goal and I want to get people involved in the local community," he says. "This military honor is beneficial in that it gives me a voice and venue to advocate for soldiers."

Davidson says UNT felt like home before he was even a student. While he was attending NCTC, he was befriended by members of the UNT rugby team who let him practice with them.

"Those guys went out of their way to welcome me," he says. "And they encouraged me with my deployment and Facebooked me while I was overseas. I felt like I owed them."

He says he consulted with UNT's Veterans Center staff before applying and they helped him through his transfer process.

"They are veterans themselves, so I've spent time talking with them about my transition back to the home front," he says. "In general, UNT is incredibly supportive of the military. People go out of their way to say, 'Thanks for your service to our country.'"

Davidson, a hospitality management major, says he learned UNT was a leader in veteran services when he was still in Africa researching universities. UNT's commitment to the more than 2,500 student veterans and their families has been recognized by G.I. Jobs magazine, which for three consecutive years has named UNT to its annual list of military friendly schools. Military Times EDGE twice has named UNT a Best for Vets school, evaluating categories such as financial assistance, academic flexibly, campus culture and support services.

"After feeling the welcome from the UNT community and meeting with President Rawlins, I'm convinced that the UNT leadership breeds this positive response for its student veterans," Davidson says. "UNT creates a culture that doesn't protest soldiers, but supports them and their success. I wouldn't go anywhere else but UNT." How can you best pair wines with holiday meals?