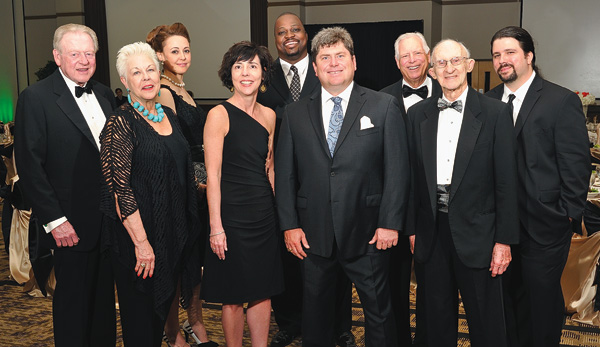 UNT’s annual Alumni Awards Dinner — a long-standing university tradition — recognized the outstanding achievements, service and support of UNT alumni and friends. The April 20 event honored recipients who have made their mark in the financial services industry, played in the Super Bowl, earned Grammy nominations and helped create one of the world’s most popular video games. The most prestigious honor, the Distinguished Alumni Award, has been presented since 1965, and is awarded to individuals who have achieved prominence in their professions. The Distinguished Young Alumni Award honors alumni under 40 for distinguished achievement.

"We’re extremely proud of these individuals and their work," President V. Lane Rawlins says. "These are people who have distinguished themselves in their careers and in their communities, embodying the best of themselves and of UNT."

Donald C. Potts began his career in the financial services industry with the brokerage firm Merrill Lynch Pierce Fenner & Smith, and in 1977, he founded Capital Institutional Services (CAPIS). He has served on the institutional committee of the New York Stock Exchange. Potts remains a board chair of CAPIS and is a board member for Hope Cottage Pregnancy and Adoption Center in Dallas. For 11 years, Potts served on the board of the UNT Foundation, and he chaired the foundation’s investment committee for four years. In 2011, he was appointed by Texas Gov. Rick Perry as a UNT System regent.

"Looking back on the defining events of my life," Potts says, "my decision to seek a degree from North Texas was certainly one of the most rewarding decisions I have ever made."

Jason West worked at Paradigm Entertainment and then at a start-up game studio, 2015, to work on the video game "Medal of Honor: Allied Assault," which became a huge success. In 2002, he co-founded the Infinity Ward studio, which created "Call of Duty." West last directed "Call of Duty: Modern Warfare 2," which sold about 20 million units and generated an estimated $1.3 billion in sales to date. In 2010, West began a new independent studio called Respawn Entertainment where he specializes in realistic, first-person perspective military action games with real-world settings.

As a founding member of Ian Parberry’s Laboratory for the Advancement of Recreational Computing group, West says, "The impact of a small group of like-minded students working in skunk works projects cannot be overstated."

Pianist Petronel Malan has been lauded by reviewers as an unmistakably creative force in the classical music industry. Her debut disc, Transfigured Bach, received three Grammy nominations, including Best Instrumental Solo Album. She followed with Transfigured Mozart (2006), Transfigured Beethoven (2008) and Transfigured Tchaikovsky (2011), all recorded for the independent label Hanssler CLASSIC. Malan resides in the U.S. but maintains strong ties to her native South Africa. She received the Rapport/City Press Prestige Award as one of the 10 most inspirational women in South Africa.

"My experiences at UNT provided me with a solid education and the experience to perform and reach audiences around the world," Malan says.

During Brian Waters’ Mean Green football career (1995-98), he focused on community service courses and volunteered with the Boys and Girls Clubs and other projects. Now a six-time Pro Bowl guard who played in the Super Bowl this year with the NFL’s New England Patriots, Waters received the Walter Payton NFL Man of the Year award in 2009 for his charitable work, then as a member of the Kansas City Chiefs. The Brian Waters 54 Foundation, which he began in 2005, works with more than 20 agencies to help children in need through programs offering such support as sports camps, school clothes and college scholarships.

"Many memories from community service classes to the football program all helped shaped me into the man I am today," Waters says, "and helped to give me a strong foundation dedicated to giving back to the community."

Presented to honor individuals who have provided exceptional volunteer service to UNT.

Brenda (’63) and R.L. (’63) Crawford Jr. met as students at North Texas. R.L. began his career with Northwestern Mutual Financial Network, and in 1989 Texas Gov. Bill Clements appointed him to the UNT Board of Regents. He was appointed to the UNT Foundation board where he continues to serve. Brenda was a charter member of the advisory board that formed the present UNT Alumni Association and has served on the College of Arts and Sciences and the College of Visual Arts and Design advisory boards.

Robert J. "Bob" Rogers, Professor Emeritus of music and former piano student at North Texas, taught piano pedagogy at the university from 1948 to 1984. His volunteer activities include genetic screening and counseling for the state of Texas; teaching typing for computer proficiency to fifth graders at Sam Houston Elementary School; and serving as a volunteer in the UNT Music Library since 1985.

Presented to an individual or group that has made noteworthy efforts to sustain spirit among the UNT family. Ulys Knight (’28), a basketball player named most popular man on campus, was later known as "Mr. North Texas" for his participation in alumni activities.

Julie (’91, ’91 M.S.) and David (’99) Anderson are active members of the Mean Green Club and serve as Mean Green Club representatives. Julie is controller and chief accounting officer for Texas Capital Bank and David is the owner and founder of Anderson’s Pro Flooring in Lake Dallas. UNT honors extraordinary alumni for their notable careers and service.

UNT honors the spirit of philanthropy, entrepreneurship and service.