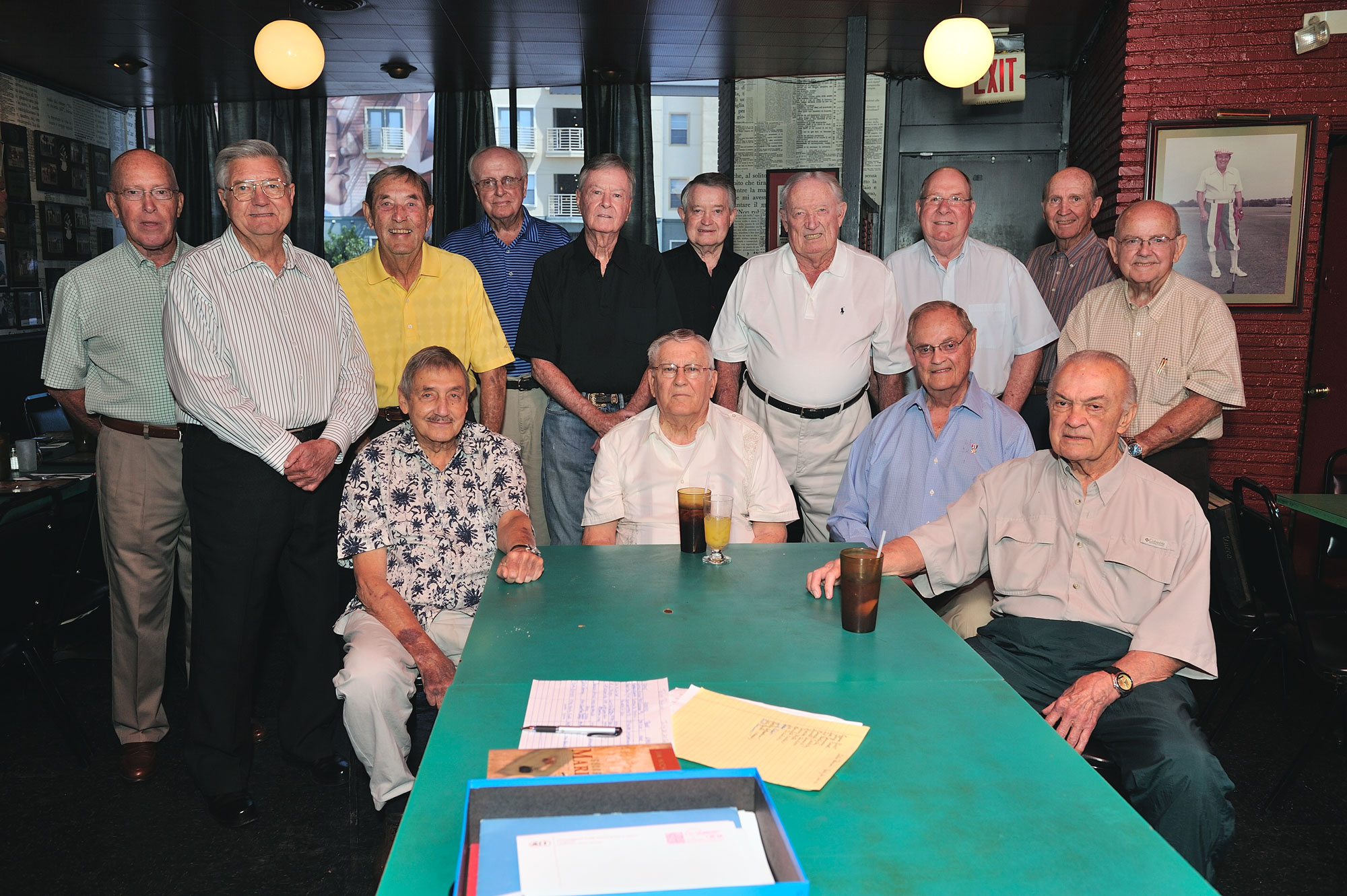 Talons from the 1940s and '50s got together in July to share stories at Campisi's Egyptian Lounge in Dallas.

Future doctors, lawyers, educators, businessmen and some well-known names were Talons at North Texas. Founded in the 1920s as the earliest men's social club on campus, the Talons became the Kappa Alpha Order in 1953-54 when the local campus clubs affiliated with national Greek organizations. (Later, the Talons name was used for the spirit group on campus.)

Talons from the 1940s and '50s got together in July to share stories at Campisi's Egyptian Lounge in Dallas.

"We used to take our dates to the Egyptian," says Sid Holliday ('53), who hosted a Talons get-together about a decade ago that kicked off the reunions. "That was the place to go. Of course, they only had one road coming from Denton at the time."

Other favorite pastimes included dancing at Louann’s and at Flight 21 in Dallas, listening to the Lab Band on campus, socializing at the UB and generally enjoying life at the Talons house, which at one point was located across from the President’s House on Hickory and Avenue B.

Holliday passed the organization of the reunions along to George Ferrell ('54), who was vice president in the last year of the Talons and in the first year of the KAs, and Ferrell recently passed that duty to longtime doctor Jim Nicholson ('55).

Nicholson says the Talons were just "good blue-collar guys from blue-collar families" who made something of themselves. They were a popular group, and administrators were familiar with them, too.

"We did some good things, and we did some college-boy mischief," he recalls. "Let's just say President Matthews knew us all by first name."

The organization was "a magnet for golfers," including Billy Maxwell, Don January ('53), Marion Hiskey ('54) and A.J. Triggs ('55). Soon after the Talons became the KAs, an already well-known singer by the name of Pat Boone pledged the group. The story goes that it took several rounds of voting before he was admitted into membership, thanks to a few members who jokingly blackballed the highly sought-after pledge. Boone served as chaplain and was often asked to sing from the tabletops.

Some of the men met their wives on campus. Holliday met Dottie Maddox (’57) when she had a fender bender in front of the Talons house, and they’ve now been married nearly 60 years. John Wright (’51) knew Topsy Roberson (’50), his future wife and a future UNT regent, from her days as a Phi Sigma Alpha on campus.

“Probably 60 percent of the Talons were already married, so they were dead serious about getting an education,” says Wright, a lawyer who served in the Texas Legislature.

College was put on hold as the Talons joined the military during the Korean War, serving in all branches. Holliday left for the Army; Triggs and Winston Hudson (’54) were among 13 who joined the Coast Guard; Tru Pollard (’55) was a Navy pilot; Darrell Arnold (’55), who had been working nights while going to school, joined the Air Force along with pilots Ferrell and Bob Donohue (’53), to name just a few. Marines included Kenneth Fuller (’54), a pilot who retired as a lieutenant colonel, and Nicholson, who was awarded the Silver Star just last year for his actions in the war.

The Talons have stayed in touch with UNT over the years. Gene Bond, who also left to serve in the Marines, returned to the university's expanded campus for the UNT graduations of his grandchildren and says he “only got lost a few times.” Wright has seen progress firsthand in his service on the UNT Foundation board. January — whose grandsons have competed on the football and track teams — is the namesake of a UNT golf tournament fund-raiser held each year.

Bill Lawhorn ('50, '51 M.S.), a center on the football team who became a dentist, returns regularly for games and encourages everyone to attend Homecoming. As an athlete, Lawhorn had access to laundry facilities and washed clothes for fellow Talons. He says they mostly paid their laundry bill — with some exceptions.

"Be sure and say that Billy Maxwell still owes me for two shirts and a pair of pants," he jokes.

For more information about the group's activities, email sid168@att.net.