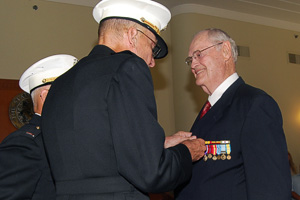 Jim Nicholson (’55) came to North Texas in 1948 as a business major. Then, he experienced three harrowing years as a soldier in the Korean War, fighting in a battle that eventually earned him a Silver Star for bravery. When he returned to campus in 1952, his war experiences made him realize that life was short and he wanted to achieve his dream of being a doctor.

“There was nothing more important than doing what you wanted to do,” he says.

In the same way UNT helped Nicholson fulfill his dream, the university’s reputation for excellence in serving veterans and their families is today drawing increasing numbers of the military community to campus. For two consecutive years, G.I. Jobs magazine has named UNT one of the top military friendly schools in the nation. And Military Times EDGE magazine has twice named the university a Best for Vets school, with categories including financial assistance, academic flexibility, campus culture and support services. 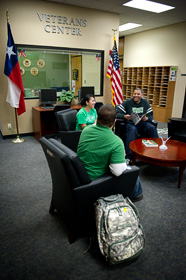 More than 2,500 members of the military community and their families attend UNT, and the number is expected to grow. To better serve these students, the university has created services specifically for them. They can get advice at the Veterans Center, join their peers at the Student Veterans Association and receive counseling through the Disability and Well-being Consortium.

Students also can join the Salute Honor Society for veterans or Omega Delta Sigma, the co-ed veterans fraternity. Other services include faculty and staff training in military sensitivity and a textbook loan program in case of delays in military benefits.

Through the years, the contributions of UNT veterans have made a lasting impact — whether on the battlefield or back on campus.

Nicholson had a hell of a night.

On April 22, 1951 — with a Browning Automatic Rifle that kept jamming — he helped fight off hundreds of Chinese soldiers who attacked his 39-man platoon in the treacherous mountains of North Korea. Toward morning, his 35-year-old sergeant ran straight into the Chinese, shooting soldiers one at a time.

“By that time, the world had come to an end,” Nicholson says. “No one thought we could ever survive.”

Nicholson threw down his rifle and ran out to his sergeant. But it was too late. The man went down. Nicholson tried to get him to safety, but he bled to death. So Nicholson retrieved his weapon, and he and the other soldiers fired as fast as they could until daylight. Most of them were able to escape. 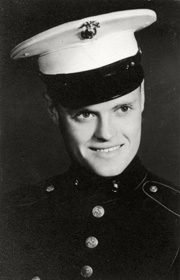 Nicholson, who fought in five major campaigns, faced another danger six months later when he was wounded at Heartbreak Ridge and had to be operated on in a rice paddy. Although he was eligible for the Silver Star and Purple Heart for his heroics, he never applied for the honors.

He’s not kidding. After he returned to campus in 1952, he changed his major to pre-medicine and took courses while working several jobs. He saved his G.I. Bill money for studies at the University of Texas Southwestern Medical Center in Dallas, where he earned his medical degree in 1959.

He then opened a family practice in Greenville, where he delivered 2,000 babies over the years and raised his family of four daughters with his wife, Wanda. Wanda applied for his Purple Heart, but he never got around to getting the Silver Star. At a reunion in 2000, his wartime buddies remarked that he wasn’t wearing that medal and ended up applying for him.

Nicholson, who wrote about his wartime experiences in the book George-3-7th Marines: A Brief Glimpse Through Time of a Group of Young Marines (Trafford Publishing), received his Silver Star this summer in a ceremony at Rockwall with 350 people in attendance.

“If they had given it to me when I was 20, I would have said, ‘Gee, that’s nice,’” he says. But, having three generations of family watch him receive it, made him proud.  “It just worked so much better.”

Helping out military members has long been a UNT tradition. At the end of World War II, the campus created Vet Village, a group of homes for military members and their families that included a cooperative grocery and a playground for children. The homes ushered in married and graduate student housing on campus.

When the first permanent union building was finished in 1949 — rebuilt from an Army Service Center moved in from Camp Bowie — it was dedicated as the Student Memorial Union Building, honoring former students who had served in the world wars. And beginning in the 1940s and continuing through the next decades, returning military members could join Gamma Iota Chi, known as GIX.

Kenneth M. Branscome (’57), who lived with about 30 other veterans in the GIX house, remembers flying over campus in his airplane and using the loudspeaker to campaign for the GIX Homecoming Queen candidate. (She won.)

Branscome, a math major who later earned a master’s in electrical engineering and worked in that field most of his life, served eight years in the Marine Corps, seeing combat in the Korean War and rising to the rank of captain. He came to North Texas on the G.I. Bill, which he says made a big difference for him. He still communicates nearly every day with one of the men he befriended in GIX.

“We had a lot of fellowship,” he says.

A place of their own 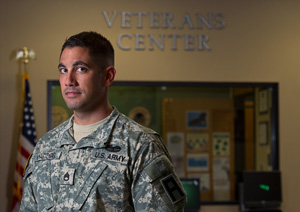 Kris Khastehdel began his coursework at UNT in 2000, but he didn’t concentrate on his studies like he thought he should. So he joined the U.S. Army in 2004.

“I wanted a change of scenery,” Khastehdel says. “I wanted something to give me guidance and direction. Everything I wanted, I got.”

He completed two tours in Iraq, climbing to the rank of staff sergeant and squad leader. In 2009, the senior construction engineering technology major returned to UNT with more focus and the help of the university’s services. He began working at the Veterans Center as a student leader and peer mentor, also becoming active in the Student Veterans Association.

“It allows me to talk about things in military lingo, and they understand it,” says Khastehdel, who is the association’s president and continues to serve in the U.S. Army Reserve.

At the Veterans Center in the University Union, student veterans hang out, watch TV or meet for tutoring. They also seek advice on financial aid and other issues.

“It’s an instant home for vets,” she says. “Everyone is pretty amazing here.” 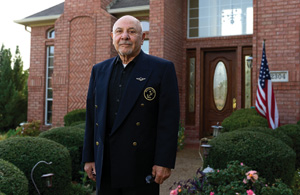 Finding ways to serve after returning to civilian life is a common trait for veterans. Nicholas Ricco (’61) came to campus in 1959 after serving seven years in the U.S. Air Force. During the first semester, he commuted to Denton three times a week while his family — which included four children — lived in Waco. He continued to fly with the Air Force Reserve for five years after graduating, then transferred to the Navy Reserve, retiring as commander after 12 years — all while establishing careers in real estate and finance.

At UNT, Ricco contributes to the Maj. Gen. Olinto Mark Barsanti Endowed Chair in Military History, named after one of the most decorated veterans in history. The professorship is part of the Military History Center, which aims to become the premier destination in the nation for the study of military history and includes an annual seminar and journal dedicated to the subject.

“I like doing things that make a difference,” he says.

And that continues with the next generation. Khastehdel, who is expected to graduate in May 2013, says he takes satisfaction in helping his peers at the Veterans Center.

“It all goes back to when I first got my stripes,” he says. “You become a leader, and you’re no longer a follower.”