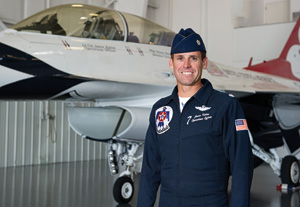 Lt. Col. Jason “Buzzer” Koltes (’94) says as an eighth grader, he first watched the Thunderbirds zoom overhead at ground-shaking speeds in a high-flying performance at an air show. He announced to his teacher that one day he would join them in the sky.

“It is neat to be a part of something that is bigger than you,” he says. “Reaching out to young people on a weekly basis and affecting change is one of the best parts of the job.”

In his first season of a two-year tour of duty with the Thunderbirds, Koltes returned to his native Texas for a weekend performance in October at the Fort Worth Alliance Air Show. The team has performed at nearly 70 air shows this year in the U.S. and Europe. During the summer, they spent six weeks performing for military and civilian audiences in Europe, including stops in Finland, Italy, the U.K., Denmark, Belgium, Turkey, Romania and Bulgaria.

“Each pilot is devoted to the mission, and it is neat to see them function so well together,” Koltes says. “We are a very close knit family on the road. We watch out for each other and ensure our families are taken care of. The wives back home become very close as well.”

Koltes has logged more than 2,500 flight hours as an Air Force pilot, with more than 58 hours of combat experience in the F-16. Before joining the Thunderbirds, Koltes was stationed at Ramstein Air Base in Germany, where he served as the executive officer to the vice commander for U.S. Air Forces in Europe.

Flying with demonstration teams is nothing new to Koltes. In 2006 and 2007, then Maj. Koltes flew as an officer on the Viper East F-16 Demonstration Team, one of two F-16 aerial demo teams in Air Combat Command.

For Koltes, flying is a family affair.

His father, who helped found a flight academy in North Dakota and flew small aircraft recreationally, planted seeds of joy-flying in his sons. As a teenager, Koltes logged his first flight hours at the Denton Municipal Airport with his father, flying between the airport and a private strip near his Ponder home.

“I first started flying planes at 15. My father, who was a pilot, gave me lessons at the Denton Regional Airport,” he says. “I got my first pilot’s license when I was 16 on a Wednesday, and on Friday my brother and I flew from Texas to Canada.”

After finishing high school, Koltes enrolled in the Air Force ROTC program at UNT and earned a bachelor’s degree in strategic management. He says the degree’s focus on business management perspectives has helped him in his military career.

“It was a stepping stone to my career in the Air Force and a good foundation for managing people and resources, which is a lot of what an officer does,” he says. “Being a tactical aviator is one thing, but being a manager and officer is my primary responsibility.”

After graduating from UNT in 1994, Koltes was commissioned as an officer in the Air Force and began his pilot training at Reese Air Force Base near Lubbock. His new wife, Heather Taylor Koltes (’93), came with him. They met at UNT while they were in the ROTC program and married after graduation. Heather served four years of active duty in the Air Force as an air traffic control officer.

“Often when I returned to the base runway from a training flight, Heather would be one of the controllers to usher me home,” Koltes says.

They now live with their four sons at Nellis Air Force Base in Las Vegas, Nev., home to the Thunderbirds. The military life and family tradition have rubbed off on their children. Koltes says their two oldest sons have shown special interest in aviation.

Love of the mission

Koltes says that sharing the Air Force with children and adult spectators alike is one of the joys of the job.

“What keeps me going is the love of the mission and getting out and meeting people, engaging with the public and talking about the Air Force,” he says. “A lot of people don’t live near a military base, so they don’t have the chance to see the aircraft we fly or meet the airmen.”

When it comes time to meet the crowd and sign autographs after the performances, Koltes says, “It’s so rewarding to see the kids’ faces when we meet them and shake their hands. I tell them to study hard in school and maybe that will plant a seed that one day they could be an aviator.”

That encouragement has real results. Koltes says that he often hears feedback from new airmen in basic training who credit the Thunderbirds for sparking their interest in the military as children.

“It’s difficult to measure the impact, but I know that these shows mean something to them,” he says.

Koltes says he realizes he has been fortunate to follow his dreams and see them come to fruition. During his recent trip to Fort Worth for the air show, he stopped by his old stomping grounds at Ponder High School to speak to students and also returned to UNT to visit the cadets in the ROTC program.

“It’s great to get back to my alma mater to see how it’s changed and grown over the years,” he says.