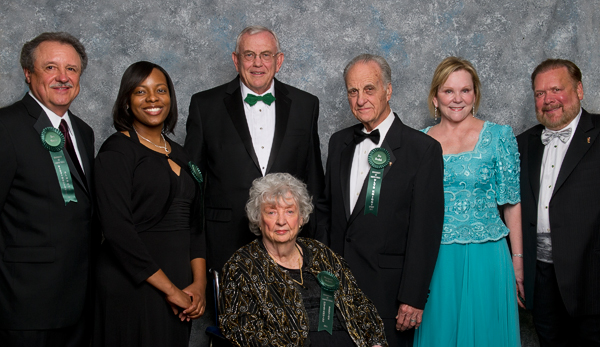 Years after leaving UNT, some alumni go on to make extraordinary contributions to their communities and accomplishments in their careers. UNT alumni and friends who embody these exceptional achievements were recognized April 15 at the annual Alumni Awards Dinner.

“It’s especially gratifying to know how accomplished our alumni are and how they have made an impact in their communities and on UNT,” President V. Lane Rawlins says. “These honorees are the best of the best and the heart and soul of our university.”

Morris, a licensed certified public accountant in Texas, is the current vice chair of the Sanders Morris Harris board of directors, a company that began with only seven employees. Today, Sanders Morris Harris has more than 500 employees and annual revenues of more than $180 million. For his leadership and entrepreneurial skills, Morris was honored with the 2011 Distinguished Alumnus Award.

“Ben gives back to the community in ways beyond money and conventional service on boards — although he is generous in those ways as well,” says George Ball, chair and chief executive officer of Sanders Morris Harris. “If there was an image a university would want of its alumni, that of being both successful and straight shooting, then Ben Morris is that person. He manifests what every school hopes to accomplish with and for its graduates.”

Morris, who earned his bachelor’s degree in accounting, co-founded a financial services firm in 1987 that grew into the public Sanders Morris Harris firm more than a decade later. In 2002, he was named the firm’s CEO and served in that capacity until his retirement in 2009.

Morris was named UNT’s Department of Accounting Outstanding Alumnus in 2006.

After graduating with music education degrees, the Rydmans moved to Houston to work in Lindy’s family’s business, Spec’s Liquors. The Rydmans took over in 1996 and have grown Spec’s Wines, Spirits & Finer Foods into what the Houston Press has called the “Best Liquor Store” for eight consecutive years.

In 1996, John and Lindy established the Spec’s Charitable Foundation with the purpose of supporting educational programs. Since 1999, the foundation has funded a scholarship and an endowment at UNT, as well as a scholarship with the Galveston-Houston Catholic Diocese. They have stayed true to their music roots by serving as underwriters of the One O’Clock Lab Band and of the Houston Symphony’s Salute to Music Educators Concert. Their philanthropy work through the years earned the Rydmans the 2011 Distinguished Alumnus/Alumna Award.

“I believe that you could not ask for two people more suited for this honor,” says Daniel DiNardo, archbishop of the Archdiocese of Galveston-Houston. “Not only have John and Lindy advanced and promoted the educational mission of UNT, they have made it their mission to advance the educational support of their employees and their families as well.”

In addition to being honored with the 2011 Distinguished Alumnus/Alumna Award, the Rydmans received the Green Glory Award at the 2001 Alumni Awards Dinner and the Martha Turner Award of Distinction from the UNT Alumni Association in 2004.

Reades, who earned her bachelor’s degree in chemistry, is no stranger to hard work, and it’s why she is the inaugural recipient of the Distinguished Young Alumna Award.

While at UNT, Reades was a student in UNT's Honors College and a state semi-finalist for the prestigious Rhodes Scholarship while also playing point guard for the women’s basketball team. In 2002, her basketball jersey was retired and she was named the NCAA Woman of the Year for the state of Texas. She was inducted into the UNT Athletic Hall of Fame in 2007.

In 2006, Reades earned her medical degree from the University of Texas Medical Branch at Galveston, and by 2009, she had completed her emergency medicine residency at Carolinas Medical Center in Charlotte, N.C. She held an emergency medical services fellowship in 2010.

Today, she is employed at Methodist Hospital System in Dallas.

“Rosalyn embodies great intellectual talent, academic preparation and athletic expertise, along with fine character,” says Gloria Cox, dean of the Honors College. “It is thrilling to see that she is now a doctor.

After completing her bachelor’s degree in library science and earning a master’s at the University of Texas, Nichols spent 10 years in the library and information field before joining the UNT faculty in 1955. After retiring in 1996, she was named Professor Emerita.

Throughout her many years of teaching, she was a mentor and friend to thousands of information professionals who subsequently endowed the Margaret Irby Nichols Scholarship. Her influence as an educator was not limited to teaching at UNT. She conducted more than 400 workshops throughout the country and published six books and numerous articles on reference and information services.

UNT recognized her with the 2011 Outstanding Alumna Service Award for her exceptional volunteer service to UNT.

Herman Totten, interim vice president for university and community affairs, says one of Nichols’ most notable contributions to UNT is “her excellent, longstanding — more than half a century — reputation for expertise in the library field.”

“Not only does it speak to the quality of her education at UNT, but also of her dedication to a lifetime of service to education,” he says.

Nichols also has served as president of the Texas Library Association, was named a TLA 20th Century Library Champion and received the TLA Distinguished Service Award.

Bezdek, Professor Emeritus of education, earned his bachelor’s in mathematics and master’s in administrative leadership from UNT. He also holds a doctorate in curriculum development from Cornell University. Today, he is an internationally recognized mathematics educator of the “new math” era and has written and co-written numerous publications, including two major series of mathematics textbooks and supplementary materials in English and Spanish.

During his 45-year career, he also has served as a mathematics research analyst, consultant and nuclear engineer, and served in several leadership positions in public and higher education.

Bezdek was honored with the 2011 Ulys Knight Spirit Award for his help in sustaining the spirit of UNT. Since 2004, his efforts have resulted in the creation of the Jim and Rose Bezdek Endowment Celebrating Czech Music and Culture at UNT.

“Jim singlehandedly initiated the discussion of establishing a program celebrating and presenting Czech music at UNT and helped us conceive and develop a plan for an annual residency,” says James Scott, dean of the College of Music. “Beyond his many faculty accomplishments, he has earned our profound appreciation for creating something unique in the country, and that helps define our outstanding College of Music.”

Bezdek’s other distinguished honors include receiving the Golden Eagle Award from the North Texas Administrators Council in 1992. He also is listed in Who’s Who in American Education, 1988-89, and Who’s Who in the World of Accordions in 1994.

Nominate alumni for the 2012 awards by Aug. 1, 2011, at www.unt.edu/alumniawards. You demonstrate pride in your alma mater when you participate in the nomination process. Nominations are confidential. Next year’s Alumni Awards Dinner is April 20. UNT honors extraordinary alumni for their notable careers and service.

Recipients honored for professional experience and service to UNT.