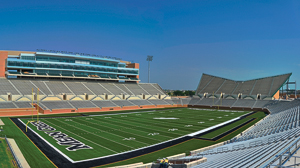 With about 30,000 seats, UNT’s Mean Green Stadium will be the first collegiate stadium designed with on-site wind power. It was designed by award-winning architects HKS Sports and Entertainment Group, which also designed the Dallas Cowboys Stadium. 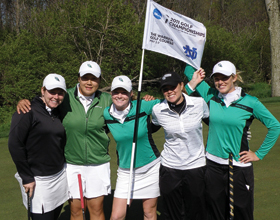 The Mean Green women’s golf team advanced to postseason play for the first time in school history this season. The women received an at-large bid to the NCAA Central Regional, where they placed 16th, and they broke the top 50 for their highest national ranking ever. They won four tournaments, four players were named all-conference and head coach Jeff Mitchell was named Sun Belt Conference Coach of the Year.

The men’s team also advanced to the postseason, the first time since 2003. After placing second at the conference tournament, the team earned an at-large bid to the NCAA West Regional, placing ninth. Two players were named all-conference, and Carlos Ortiz, who won the conference championship, also was named all-region. The team was ranked No. 39 nationally.

Two Mean Green teams — the men’s cross country and women’s tennis squads — earned perfect multiyear scores of 1,000 on the NCAA’s annual Academic Progress Rate (APR) report, a first in school history. Seven sports recorded their highest-ever marks while 10 teams, including every men’s program, showed improvement from last year’s report and 12 teams scored higher than 960. Of the 21 NCAA Division I schools in the state of Texas, UNT is one of just four to have multiple sports with perfect multiyear scores.

Senior running back Lance Dunbar, who received All-America honors in 2009, is a preseason pick again this year. His 1,885 all-purpose yards last year set a single-season school record and ranked No. 4 nationally. He ranked sixth in the NCAA in rushing and was just the second running back in school history to post back-to-back 1,000-yard seasons (Kevin Galbreath was the first). Dunbar enters his senior season ranked second all-time at UNT in touchdowns (37), all-purpose yards (3,900) and 100-yard rushing games (16). 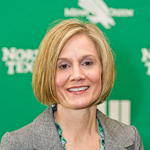 Karen Aston, the new Mean Green women’s basketball coach, brings a wealth of experience to UNT after coaching at the University of Texas at Austin, Baylor University and for the last four seasons as the head coach at the University of North Carolina-Charlotte, where she led her team to postseason play each year.

This is Aston’s second time to coach at UNT. She was an assistant coach from 1996 to 1998 and was instrumental in the recruitment of two of the greatest players in the program’s history, Jalie Mitchell (’02) and Rosalyn Reades (’02).

Learn how you can support UNT by wearing official university-branded gear in this issue’s Green Pride.