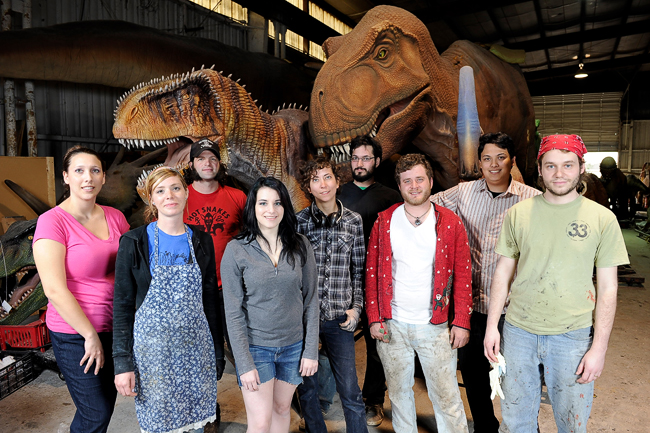 The tail of a dinosaur pokes out of a McKinney warehouse. Inside, sparks fly as welders piece together the metal bodies of massive prehistoric creatures that will travel to zoos and museums across the United States and beyond. Sculptors trace fine lines into the foam and rubber coating the metal frame. Painters spray the creatures with reds, oranges and blacks. This is what the workers have affectionately nicknamed “Dino Land” — the home of Billings Productions, a family-owned business of 40 employees who build and lease life-sized animatronic dinosaurs that have been exhibited as far as Japan and France. Its skilled employees include several UNT graduates with degrees ranging from business to visual arts.

Knowing where to look

“UNT is a good way to find local people who are well qualified,” says Lawrence “Trey” Billings (’09), vice president of operations of Billings Productions, whose father started the business that has brought to life more than 250 dinosaurs. “We prefer people we can train up, but we’re looking for the most talented.”

A degree in decision sciences from the College of Business helped Billings think about tackling his business in different ways, he says. Mike Sexton, who taught his capstone class at the end of his degree program, left him with memorable words.

“Sexton always said that having a college degree doesn’t mean you know everything, it means you know where to look,” says Billings, standing near a Sarcosuchus, the distant crocodile relative lurking on the ground and baring its fangs. “I don’t know the solutions, but I know where to find the solutions.”

An engineer, Larry Billings began the company in 2003. He died in 2007, but Trey and his mother, Sandra, kept the business going, maintaining his father’s mission of educating through entertainment. 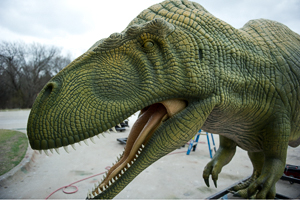 Senior sculptor Carl Bajandas (’06) recalls setting up the company’s dinosaurs in the lush, tropical undergrowth in the Oregon Zoo, primal screeches filling the air. When kids walked around the corner and saw the giant Tyrannosaurus rex roaring to life — its stubby arms waving and its head twisting — they danced in place and screamed in excitement.

“That makes it worth it to see kids’ reactions,” Bajandas says.

The job seemed a natural fit for Bajandas, a College of Visual Arts and Design graduate who had childhood dreams of becoming a paleontologist. Now, he interviews paleontologists to research dinosaurs, and he draws on his skills learned at UNT in welding, figurative sculpture and kinetic sculpture to make the dinosaurs come alive.

In a typical project, Bajandas makes miniature oil-based clay dinosaurs as models. Then, he draws lines on the dinosaur and gives the workers a specific tool for sculpting the lines; later he sculpts the dinosaur’s face and eyes. Within two to three months, depending on the size of the dinosaur, the creature is ready for its debut.

“UNT allowed me the space to explore, which led to my kinetic art, which in turn led to working at a production company,” says Bajandas, who will say good-bye to his Billings Productions co-workers in July when he pursues a master’s degree in sculpture from Carnegie Mellon University. “The program at UNT was really open, like an independent study program. I was able to go off in ‘Carl Land’ and do what I wanted, which allowed me to develop a very specific style.”

Travis Reid (’08), field service manager, oversees the installation and maintenance of dinosaurs in zoos and museums. His bachelor’s degree in sculpture comes in handy when he needs to doctor dinosaurs on-site, along with a team of skilled mechanics — many with UNT degrees.

“Let’s just say there’s a weld broken inside,” he says. “We go inside and weld it, which I learned at UNT. We sculpt the rubber material and then paint it, and if a problem occurs, I know how to repair the electronics.”

In college, Allison White Spotswood (’10) may not have realized that her office would be located steps away from a warehouse full of dinosaurs, but she says her bachelor’s degree in applied arts and sciences has prepared her well for her job as executive assistant at Billings Productions, where she handles payroll, insurance, health benefits and the bank accounts.

“UNT made me well-rounded in different areas,” she says. “I’m able to come into a setting like this and apply everything to the dinosaur business.”