More on UNT's World of Fashion

Victoria Bleakley’s (’07) interest in fashion began out of necessity.

She lost her ATM card while living in Germany after high school and needed warm clothes in the November cold. Bleakley rummaged through bins of free thrift-store rejects and found outdated “mom jeans” and long-sleeved shirts. She ripped them apart and stitched them into chic garb.

“I was hand-sewing with needle and thread, and I didn’t even know how to do anything,” she says. “But then, I thought this might be something I could get into.”

She chose to study fashion design at UNT, saying “UNT was everything I wanted.” Building on Bleakley’s humble sewing roots, UNT gave her the skills she needed for a high-powered career in the nation’s fashion capital. Now, she works as a pattern maker for prominent New York-based designer Nicole Miller.

Housed in the College of Visual Arts and Design, the fashion design program gives students a solid artistic foundation. Faculty members have years of industry experience, preparing students to make everything from couture creations to mass market designs. Graduates of the famously difficult program gain expertise to land positions with big names in the fashion world or open their own businesses. 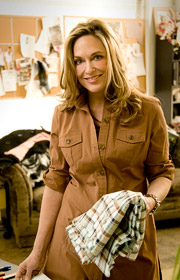 David Dang (’01) worked with major retailers before moving on to start a new company. Finley Moll (’85) built a business known nationwide for the iconic Finley Shirt, seen in the pages of Redbook and O Magazine.

Others who studied in UNT’s fashion design program include Shirin Askari (’08), a Project Runway contestant who launched her own line; Michael Faircloth (’83), designer of the red presidential inauguration gown worn by former first lady Laura Bush; Khanh Nguyen (’08), who started her own elegant, edgy fashion label; and Nicolas Villalba (’96), who opened an atelier to make custom creations in 2002 and was appointed Stanley Korshak in-house designer in 2004.

Pieces of the puzzle

At UNT, Bleakley learned how to sew, choose fabrics, and drape and fit garments. She got hooked on the New York fashion scene during a trip with faculty members.

Straight out of college, she earned a three-week Nicole Miller internship that led to her full-time position.

“Being a pattern maker is like being a garment engineer,” she says. “We are creating the pieces of the puzzle that will fit together to create the final garment.”

Bleakley has helped create several tops that have debuted during New York Fashion Week — the semi-annual exhibition of the hottest up-and-coming fashion trends.

During one Fashion Week show, Miller herself wore a button-down shirt that Bleakley engineered.

“It was great to see my work out there on this national stage,” Bleakley says.

Knowing the solid work ethic of UNT graduates, Nicole Miller has recruited several UNT interns, Bleakley says. Those include Dana Case (’10), who — after her internship — earned a full-time spot as a production and pattern maker assistant working next to Bleakley.

Dang (’01) says his UNT professors pushed his creativity while keeping him grounded in reality. (“Have you heard of gravity?” longtime fashion design faculty member Marian O’Rourke-Kaplan is known to ask students when she sees some of their designs on paper.)

After college, Dang worked as a designer for Dillard’s and a technical designer at Kellwood, making clothing lines for premier brands.

He later nabbed a position as designer, then senior designer and later account manager at sweater manufacturer KBL, working with such major retailers as L.L. Bean, Kohl’s and Target.

In 2010, Dang moved to Shanghai to become vice president of design and product branding for Full Linkage Corp. Dang is developing a business plan and marketing strategy to launch a line of brand-name golf apparel and accessories in China.

“She had a very strong technical background and showed me that as long as you have a strong foundation of knowledge and think clearly, you can build upon it,” Dang says.

“I took that foundation with me to work, and I am applying all of that now.”

At UNT, Moll found freedom to make fashions that stretched her creativity — including one memorable but perhaps too experimental dress made of metal. The model — still her friend today — loves to remind her that the dress “cut her to pieces,” Moll says.

“Being at North Texas in the ’80s was really fun,” she says. “There was so much happening with music and fashion and art, it was kind of a microcosm of the art community that a lot of people didn’t know about — kind of like Austin before Austin got discovered.”

Today, Moll runs Finley, a successful Dallas-based company that sells to 500 retailers, including Nordstrom. She and business partner Heather McNeill began the sportswear company in 1995 before honing in on the success of their tailored white shirts for women.

“We took a hard look at what we were doing, and the shirts were by far outselling everything,” Moll says. “At the time, no one was doing a shirt with our aesthetic and our attitude.”

The company eventually added colored shirts and original prints designed by Moll. Today, she is proud the business stayed privately owned with loyal local employees while gaining national attention. She sees women of all ages wearing the Finley Shirt — from the Los Angeles airport to the streets of New York.

“Probably an ‘aha’ moment for me was when I was in New York seven or eight years ago, and I was walking through SoHo after market, and there was my shirt in a window in a store,” she says.

“I was surprised. To experience it and not be looking for it — it was just wonderful. It made it very real to me.”