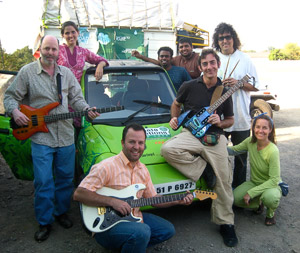 “I learned tools of the trade from extraordinary physics professors,” he says, “and gigged in local clubs with outstanding UNT musicians.”

And the sun isn’t only a theme but a method. The band’s equipment is powered by an off-grid solar power station assembled from portable solar panels, a charge controller, batteries and a power converter. Bigelow can charge the station in transit to gigs with a solar panel mounted atop his Subaru. At each performance, he puts his teaching skills to work, showing audiences how the gear works and expounding on sustainability.

In early 2009, the band traveled by solar-electric cars across India on a 40-day tour to spotlight climate solutions.

“We negotiated for electrical power at gas stations, hotels and dhabas (road-side eateries),” says Bigelow (kneeling above), who fondly remembers repairing a solar lantern “using a multi-meter, spoon and razor” and discussing solar-induced water-purification techniques through an interpreter at a town-hall meeting.

With another trip to India completed, a second album due out this year and plans for a tour of France and the Caribbean, Bigelow hopes to inspire others to join the cause.

“Music is indeed an international language,” he says. UNT is at the forefront of sustainability with new projects.
Top