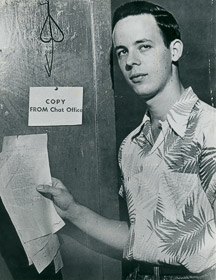 Five years after leaving North Texas with his journalism degree, Ray Moseley (’52) found himself at Central High School in Little Rock, covering the violent desegregation for the Arkansas Gazette. He thought at the time it might be the biggest story of his career. But it was just the beginning.

In his book In Foreign Fields: A Veteran Correspondent’s Brushes with Wars, Revolution, Secret Police and Flea-Pit Hotels (Lulu), the UNT Distinguished Alumnus  and Pulitzer Prize nominee recounts the adventures of nearly 50 years in journalism, many spent as an overseas correspondent for United Press International and the Chicago Tribune. Covering the world’s news from Rome, Cairo, Nairobi, Moscow, Berlin, Belgrade and London, Moseley was on the scene for revolution in Iran, the Six-Day War, the fall of the Berlin Wall and more, dodging bullets and the KGB along the way.

Robin Knight, formerly a foreign correspondent for U.S. News & World Report and book reviewer for Time, writes that “a reader is left amazed at the versatility, stamina, resourcefulness and dogged legwork that kept Moseley chasing the news for so many years in so many awful places.”

Knight calls foreign correspondents today “an endangered species,” and Moseley refers to the book as his “testament to a vanishing age.”

“Had I come into journalism just a few years ago, and finished work a half century from now,” Moseley writes, “I would never have had experiences remotely similar to those recounted in this book.”