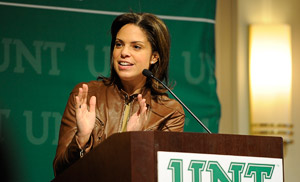 Soledad O’Brien, host of the In America documentary unit on CNN, and Hill Harper, who portrays coroner Sheldon Hawkes on CBS’ CSI: NY, were among the keynote speakers at UNT’s 11th Equity and Diversity Conference in February.

The Celebrating the Big I.D.E.A.: Inclusion, Diversity, Equity and Access conference was aimed at students, educators and professionals who are committed to equity and diversity in the workforce and in higher education. Topics included mentoring, equal pay, black masculinity, communication skills for student leaders, social justice and veterans’ transition to civilian student life.

O’Brien, who joined CNN in 2003, is a former host of its morning newscast American Morning and has been a correspondent for CNN: Special Investigations Unit and the anchor of a CNN special, Black in America.

Harper is the author of the motivational books Letters to a Young Sister and Letters to a Young Brother, based on his life. Other keynote speakers included activist Tim Wise, author of Between Barack and a Hard Place: Challenging Racism, and Evelyn Hu DeHart, who has published three books on the Yaqui Indians.