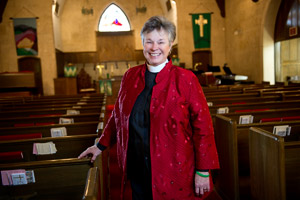 Carol West (’71) always felt her calling in life was to help people, and she has been doing just that for nearly three decades in the Dallas-Fort Worth area.

West, 61, is pastor of Celebration Community Church in Fort Worth, one of the most recognized churches in the area serving the gay, lesbian, bisexual and transgendered community.

Throughout the years, she has received numerous honors for her work to change the way people view others they consider different. Most recently, West was honored with the 2010 Kuchling Humanitarian Award from the Black Tie Dinner organization. Since 1983, the Dallas organization has used the Kuchling award to honor individuals who have made extraordinary gifts of their time and talents on behalf of the GLBT community.

“Carol is always a gracious diplomat but never afraid to stand up for the rights of the GLBT community,” Lemons says. “She not only defends and unites our community, but she nourishes the souls of almost 500 congregants at Celebration Community Church.”

West says she first learned what it means to embrace diversity when she chose to attend the university in 1967.

She says it offered her an escape from her then-small hometown of Irving during a time when there was less sensitivity to diversity in public life and at public institutions.

“North Texas showed me that everybody wasn’t alike. You learned to work with people,” she says. “It was a larger world than I had ever been in after growing up in a small town, but there was a sense of camaraderie. North Texas embodied diversity more so than any other place I’d been. You also got a quality education while there.”

After graduating, West became an ordained minister and went on to wear many other hats throughout her career, which included 17 years as an Irving high school teacher and a suicide prevention counselor.

The first AIDS chaplain funded by a grant from the state of Texas, she has worked in the AIDS arena since 1986, educating and counseling others about the disease. She also is known for her activism after the June 2009 raid on the Rainbow Lounge, a bar that caters to the GLBT community in Fort Worth.

West and her church played a major role in rallying the GLBT community after the raid, which led to the formation of the advocacy group Fairness Fort Worth — West is a founding member and sitting vice president.

“The raid was an unfortunate catalyst that needed to happen in Fort Worth,” says West, who convinced some police officers, Fort Worth’s police chief and his wife to attend her church to better understand the area’s GLBT community.

Looking back, West says her church has made significant progress since she became senior pastor in 1998. The church has grown from 35 members to 500 and today owns its own campus, which includes a counseling center. Its members come from different faiths and include heterosexual family members seeking an understanding of their loved ones or just looking for a church home, she says.

“We try to make it a place where all people will feel comfortable,” she says. “There is a true sense of community in Fort Worth.”

West says her church also gives back to the communities it serves by awarding college scholarships to deserving students and working with numerous nonprofits and food banks to help those less fortunate.

“We really feel like we’re a church for all people,” she says.

For West, the Kuchling award serves as a confirmation that she chose the right career path and that her work isn’t going unnoticed.

“It’s one of the highlights of my life,” she says.