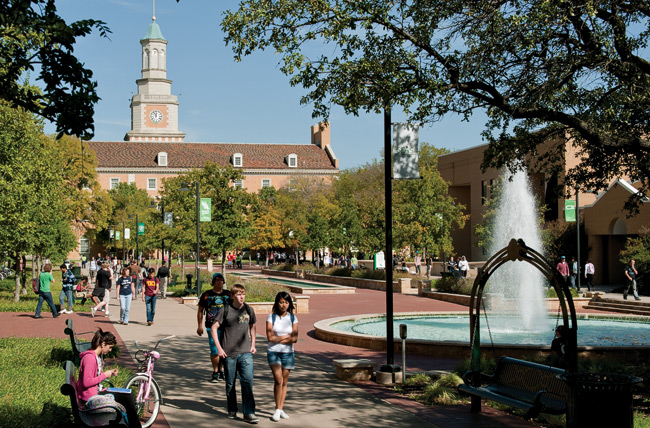 When UNT began as a normal college in 1890, President Joshua C. Chilton declared the institution's aim to become a leader in "the education of the young men and women of Texas, fitting them to creditably fill the most important positions in business and professional circles." The city of Denton, destined to be the educational center of the North Texas region, had a population of 2,558.

Now, 121 years later, Denton is closer to 120,000 and UNT is the nation's 33rd-largest public university, preparing about 36,000 students to fill society's important positions. The university continues to grow with new facilities that enhance the student experience, such as the state-of-the-art Business Leadership Building and Apogee Stadium.

Today, UNT has ties around the world, and its influence begins at home as the largest, most comprehensive university in Dallas-Fort Worth — the nation's fourth-largest metropolitan area and the location of many of America's fastest-growing cities.

UNT connects hundreds of thousands of people within the region and state — students and their families, alumni, faculty and staff, researchers, business people and visitors to campus. The university fuels knowledge to help create jobs and attract start ups. Its investments in new research initiatives and forward-looking degree programs contribute significantly to a thriving region.

"UNT's 121-year legacy of providing students with the highest-quality education has furnished Texas with generations of innovative thinkers to lead and carry out the work of the state's industries," says President V. Lane Rawlins.

"Today, we continue to give our students a strong academic foundation and hands-on opportunities, making our region and state more and more competitive. The investments we are making to continue our growth as a major public research university with the best undergraduate education in Texas will only deepen our impact."

UNT is a major regional employer in its own right, with more than 9,000 faculty and staff. Operations spending by the university generates more than $1.3 billion in economic activity in the Dallas-Fort Worth region each year.

In addition, to support the university's growth, UNT has engaged in an aggressive capital spending program for modern classrooms, laboratories and, most recently, the new stadium.

"The fact that UNT is growing and adding staff, students and programs has a tremendous economic impact on area population and jobs," says Linda Ratliff ('96), director of economic development for the city of Denton.

Terry Clower ('92 M.S., '97 Ph.D.), director of UNT's Center for Economic Development and Research, says it's the impact of alumni on the North Texas region that is perhaps most telling.

"Household spending by UNT alumni living in this region creates more than $10 billion in economic activity each year. UNT graduates can be found in businesses, the public sector and nonprofit organizations, many in leadership positions," he says. "They are key contributors to economic and community development in North Texas."

By offering programs covering seven of the 10 fastest-growing high-pay jobs in North Texas counties, which include some of the fastest-growing counties in the nation, the university turns out scientists, engineers, teachers, musicians and entrepreneurs.

"Investments in research and education are especially attractive for regional development because the benefits tend to multiply and stay in a region," says Harold Strong, director of UNT's Discovery Park and technology transfer.

"Scientists who want to spin off their research into commercial ventures usually want to be near their labs and their industry partners. And once an innovative cluster of businesses starts to form, the industry usually puts down deep roots." 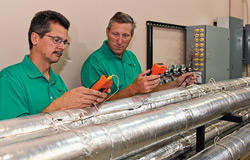 Greg Bohl, president and CEO, says his team selected UNT from other university incubator programs in the area.

"The synergy from the leadership and network of UNT's Office of Technology Transfer and the skills from faculty and students in the Department of Mechanical and Energy Engineering are significant time savers for us," he says.

"That's very important to us as a start up."

Drew Springer ('88), chief operating officer, says the company will add manufacturing jobs and white- and green-collar jobs to the area.

"Our business design includes the use of existing North Texas regional companies, and once we move past the incubator stage we'll continue to use UNT as a valuable resource for research as well as talent recruitment," he says.

Equipment including a focused ion beam microscope, a transmission electron microscope and a local electrode atom probe is unique to UNT in that no other academic lab in the world is using all three devices together for research.

Also inviting to researchers is UNT's new Zero Energy Research Laboratory under construction at Discovery Park, designed to test emerging technologies that allow building systems to have a net-zero consumption of energy. Once completed in early 2012, it will be the first of its kind in the U.S.

Since 2000, UNT researchers have 24 issued patents. With existing faculty, strategic investment in 15 interdisciplinary research clusters and six strategic areas of investment, and more than 200 research-active faculty to be added by 2020, UNT plans to reach external funding goals of $45 million in research expenditures by 2015.

"The research park and other new programs provide opportunities for businesses to expand and for entrepreneurs to develop their products," Ratliff says. "A healthy, creative atmosphere is a benefit to the community and a reason for new companies to locate."

Significant economic impacts are produced by the university's construction and renovation projects, offering contractual jobs and spending. UNT not only is renovating existing spaces, such as the transformed Paul Voertman Concert Hall, but also is creating new facilities with innovative eco-friendly designs.

The new Life Sciences Complex, which recently earned Gold-level LEED certification, features some of the finest aquatic and plant research facilities in the nation. The new Business Leadership Building, with cutting-edge amenities, will offer collaborative opportunities with area businesses and corporations.

And UNT's Apogee Stadium is the largest and most ambitious building project in the university's history. The construction of UNT's whole athletic complex, which includes the new stadium, has generated $165.8 million in economic activity and supported more than 1,200 construction and related jobs.

"By adding more resources, UNT is fueling one of the fastest-growing cities in America and demonstrates once again that we are terrific partners with our city and surrounding area," says Hank Dickenson, deputy athletic director.

A place of pride 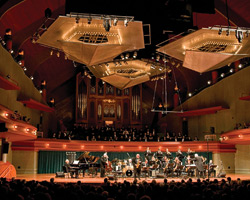 UNT facilities such as the Murchison Performing Arts Center and the Elm Fork Heritage Museum and Education Center draw visitors to campus who spend money locally.

UNT's campus master plan calls for the redevelopment of the former golf course adjacent to the stadium into a prime destination for business professionals, conventioneers and vacationers with space for a proposed hotel with first-class meeting and convention facilities. 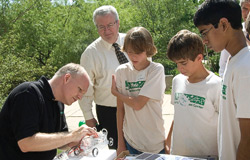 "When people see major construction under way, they get a feeling of progress and pride, understanding that a significant investment has been made," she says.

"Businesses see an indication that the economy is improving and this could influence their decisions to expand or locate. The long-term results are the jobs created and the ability to pull talented, educated residents to the area."

Paul Chandler ('72), president of Meridian Bank and chair of the board of the Denton Chamber of Commerce, has lived in Denton since the 1950s. He understands the value UNT has always brought to North Texas.

"The original 10-acre site of the university was bought by businessmen more than a century ago, showing the support from the business community around the region since day one," he says.

"Now, as the largest economic engine of the city, the university is building success for years and years to come." Boosting economic activity in the Dallas-Fort Worth area by $1.65 billion annually, UNT has been a driving force in the North Texas region's growth since the university's founding in 1890.
Top